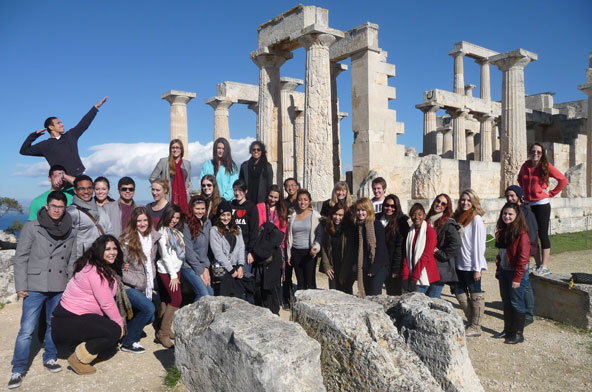 WHEN YOU TRAVEL ABROAD FOR THE FIRST TIME, you begin to collect the moments when you realize you’re far from the ordinary of home. For me, it was the moment I walked into the Sistine Chapel where tourists gathered together to look up at that vast, grand ceiling of the Renaissance masterpiece. It was the time when my classmates and I got lost in Vatican City and had to find our way back to our hotel through the twisted streets of Rome. It was sitting in mass at St. Peter’s Basilica with people from all over the world, coming together for a shared experience and purpose. It was visiting the mystical Temple of Poseidon overlooking the Aegean Sea, where the wind was as powerful as forces from the gods. It was the last night in Athens at the farewell dinner, where an old woman grabbed my hand to join her in a traditional Greek dance.

Over the fall prerequisite class, “Classical Greece and Rome” a paired-course taught by Professor Furman-Adams of the English department and Professor Hunt of the Philosophy department, we studied literature and philosophy of antiquity. We, then, spent Jan-Term abroad in two of the most beautiful cities of the world—one week in Rome, Italy and two weeks in Athens, Greece.

Traveling to these European countries meant a full experience of intellectual and personal growth. Layers of history, archeology, philosophy, religion, and art came alive and breathed through the cities’ museums and preserved ruins. Everyday our class stuck together and toured the popular sites the cities had to offer.

In Rome, we left our hotel early each morning in rain or shine, with Professor Hunt and Professor Furman-Adams as our tour guides. Because we had already studied literature from antiquity over the fall semester, the professors enthusiastically filled our minds with the historical lessons of other time periods, as well as raised philosophical thoughts relevant to specific sites. Our learning expanded from the Classics to the Renaissance to contemporary Roman culture. The professors made sure we were experiencing everything beyond the average tourist, enriching our travel with meaning and knowledge. Despite the overwhelming amounts of information, our class spent each day absorbing a vivid understanding of the struggles and victories of mankind.

I was personally inspired on our first day in Rome when we went to visit the Capuchin Crypt, where the bones of long-dead friars are collected and arranged in intricate and hauntingly beautiful designs. After reading the stories placed on the walls about some of the most famous friars and monks, I was deeply inspired by how they sacrificed their whole lives to finding God and the meaning of the human experience.

After a week in Rome, we packed our bags and prepared for our flight to Athens. During the fall semester class, we had learned about Socrates, Aristotle, and Plato, and soon we would be walking the same streets of some of history’s most influential thinkers. We visited many temples and ruins, including the temple of Poseidon, the Temple of Olympian Zeus, and the Acropolis. We also took bus trips outside of Athens and visited other fascinating sites such as the mystical mountains of Delphi and the island of Aegina.

A personal favorite experience was when we took a bus ride to the Monastery of St. Paul at Laurion. A nun welcomed our Whittier College class and offered us organic tea and Turkish delight. Our class sat in a circle while the nun told us about a day in the life at the monastery and shared her own story with us. She was soft-spoken, but I hung on to her every word. She talked about how she gave up her life in the States because she wanted to live a life that was fulfilling and meaningful.

We were in Greece for two weeks, and on our last week we stayed on an island called Naplion, a little town nestled between the sea and 999 steps (which I climbed victoriously!). I will always remember how kind the people were; how at the hotel and even at the restaurants, everyone made sure we felt at home. We spent our last days waking up each morning to a homemade breakfast on the rooftop of our hotel, overlooking the beautiful sunrise of the town and sea.

What I learned on my exciting, beautiful, and somewhat scary trip is to take in everything and take note of the small but meaningful details. The collected memories remind me of what I’ve learned, but also that I’ve experienced a little more of this world and lived with a little more risk.