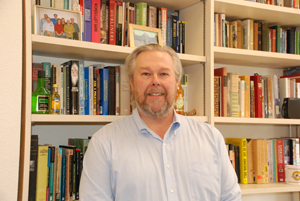 Professor Charles Eastman has been affiliated with Whittier College since 1998, having previously taught at Mt. San Antonio College and Rio Hondo College. He was named Director of the College Writing Program in 2006 after serving as the Interim Director in 2004-5. He has presented his work on Collaborative Composition, Writing Assessment, and Integrating First Year Programs at regional, national, and international conferences.