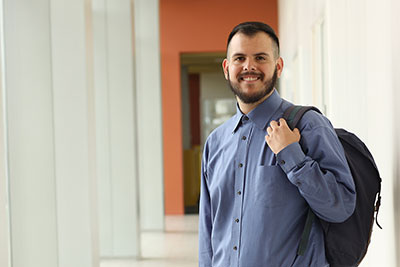 Manny Chavez ’19 wanted to better understand biological life. At Whittier, he found what he was looking for, and much more.

The biology major, with a minor in chemistry, explored his curiosity through courses on everything from the environment to cancer, with each new subject complementing his understanding of the others. But he didn’t stop there—far from it.

He signed up for a weeklong retreat to study philosophical teachings on simplicity. He dove into books and engaged his classmates about their lessons on anthropology, religion, art. He experienced Afro-Brazilian culture first-hand and picked up Portuguese during a two-week trip to Brazil. He learned about different people’s backgrounds, cultures, and ideas as a residential advisor. And though he never got around to signing up for a business or economics course, he spent many evenings absorbed in discussions with his fellow students about the corporate world and the stock market.

“Being surrounded by such a diverse campus community, I really focused on challenging my perspective of the world and others,” Chavez said. “By taking such a wide range of classes, sharing ideas with a diverse group of friends, and being advised by various faculty members, my view of the world, and my role within it, has changed so much.”

Needless to say, Chavez’s college education inspired and excited him. Even when studying a course like organic chemistry—which Chavez likened to learning a new language, given how different its nomenclature is from other sciences—he enjoyed the rigor of absorbing so much knowledge that will help him as he moves on to his career. He’s interested in working in the public health and the field of epidemiology (the study of diseases), and could see himself as an epidemiologist with the Centers for Disease Control, one day.

In the meantime, Chavez is leaving for the Peace Corps to volunteer as an HIV/AIDS health educator in Lesotho, a kingdom in southern Africa.

“I’m confident that my public health skills can cross over to my volunteer experience, and I hope I can leave a positive impact on the communities I will be working with,” he said.

He already has experience with making a difference. Last spring, he traveled with a group of students to Honduras to provide free health services. Closer to home, a fellowship with PIH Health gave him the opportunity to correlate public health data with educational opportunities for local youth, which helped create an online, interactive map that’s now being used throughout Los Angeles County. Also, with the College’s Center for Engagement with Communities (CEC), Chavez worked closely with local communities to promote college admission to first-generation high school students.

Chavez benefited from the same program. The CEC Mentor Program provided him with a mentor and offered him resources about the college application process, financial aid workshops, and standardized testing.

Though he knew he wanted to go to college, but he wasn't sure what he wanted his career to be.

“Being a doctor or a lawyer was commonly discouraged as many of my high school counselors viewed it as an unreasonable goal. It wasn’t until my junior year of high school when I realized, why can’t I be a doctor? As long as I put the effort in, I definitely could achieve that,” he said.

He’s well on his way there.