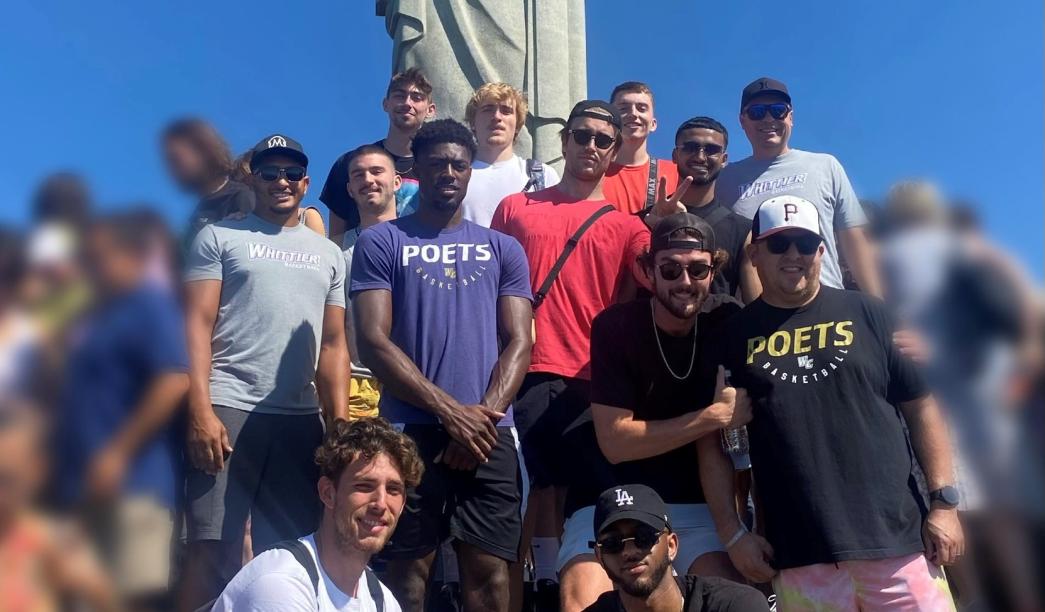 FacebookShare on TwitterShare on LinkedInPrintShare by Email
This summer the Whittier College Men’s Basketball team took an eight-day whirlwind tour of Rio de Janeiro, Brazil to get some pre-season competition under their belts and experience the sights and sounds of Rio.

This was a trip four years in the making, made possible by alumni and supporters of Poet Basketball.

On their second day in Brazil, the team played Club Flamengo’s Under-23 team in a tough game that came down to the last possession, falling by a single point. The Poets played five games in total, going 3-2 and gaining invaluable experience competing against high-level Brazilian teams.

The team made the most of an amazing trip and a city unmatched in beauty and culture. The Poets had the opportunity to take a guided bike tour of the world-renowned Copacabana and Ipanema beaches, stopping periodically to snap pictures and take in the spectacular scenery. The tour also included a visit to the famous Christ Redeemer statue, a basketball clinic for local under-privileged youth, a sky-tram trip to Sugarloaf Mountain atop one of Rio’s many distinct mountains with unbelievable vistas of the city, a dinner at a Brazilian steakhouse, and a memorable visit to one of Rio’s most famous Samba dance clubs.

“The games against quality teams, the sight-seeing, the taking in of the culture, the bonding…all of it will make us better prepared for this upcoming season,” head coach Mark Jensen said. “These trips impact our players for the rest of their lives."

The Poet players and their families expressed sincere gratitude to the alumni and other supporters, including former players who previously went on tours to Australia, Spain, and Costa Rica with the team.