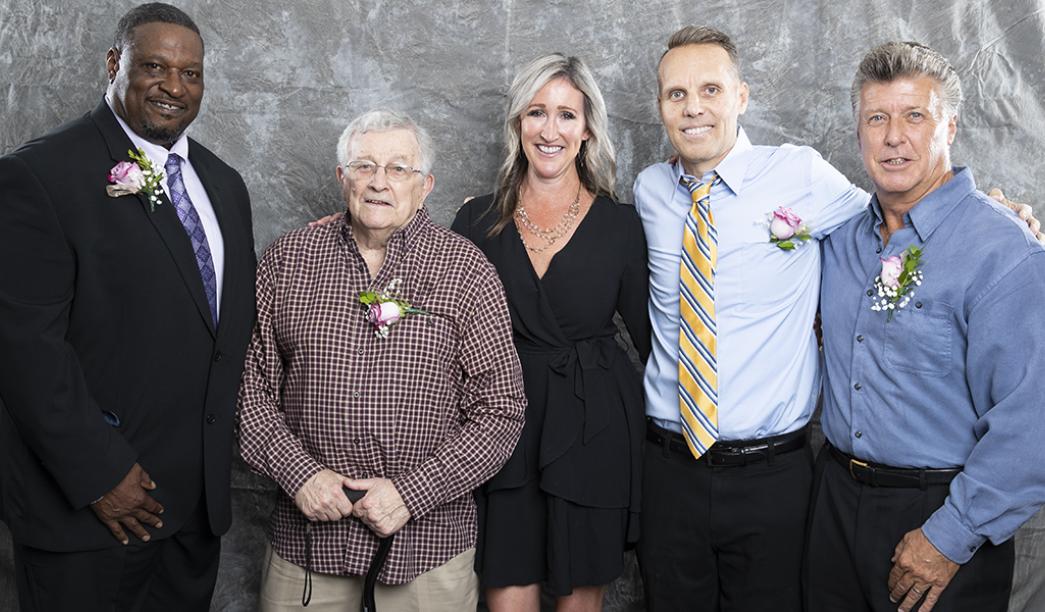 Kim (Charlson) Bogajczyk ’06 stepped foot on the Whittier College campus in the fall of 2002 and would go on to have one of the greatest careers in SCIAC water polo history! She was also a member of the swim & dive teams where she has career top 10 marks in the 1000-meter freestyle (7th) and 500-meter freestyle (10th). Bogajczyk is one of a handful of SCIAC women’s water polo players to be named 1st Team All SCIAC for four consecutive years! She was a 1st Team All-American in 2005 and 2006, as well as a 2nd Team All-American in 2003 and 2004. Additionally, she was named the Purple & Gold Freshman Athlete of the Year in 2003 and was the Purple & Gold Female Team Sport Athlete of the Year in 2005 and 2006. Today, Bogajczyk and her husband, Joseph, and three sons reside in Escondido, CA and she is the off-premise chain manager, west for the Michael David Winery.

Wallace "Wally" Kincaid ’50 played baseball, basketball, and football, and ran track at Downey High School. After serving in the Navy for three years, Kincaid entered Whittier College in the fall of 1946. At Whittier, he played basketball and baseball, serving as captain of the baseball team his senior year. Kincaid married his wife, Mona, in 1950 after he graduated and they went on to have five children, 15 grandchildren, and 33 great-grandchildren. In 1958, Kincaid was named the head baseball coach at Cerritos College, and in his 22 years at the helm, he amassed 678 victories and had a winning percentage of .806. Kincaid passed away on November 16, 2015, but his memory and legacy live on, and many credit Wally for creating the modern version of college baseball. Among the many honors he received, he was inducted into the California Community College Hall of Fame, Downey High School Hall of Fame, Cerritos College Hall of Fame, College Baseball Hall of Fame, and ABCA Hall of Fame. The field at Cerritos College is named Kincaid Field, and in 2000 Baseball America named Kincaid as the Community College Coach of the Decade. Wally had over 150 players go on to professional baseball careers and over 100 became coaches at all levels.

Scott Manson ’98 teaches U.S. History at The Odyssey Academy and is the men’s soccer coach at Lakewood High School. While attending Whittier, Scott was the leading scorer in 1995, 1996, and 1997. He amassed 62 career goals as a Poet—a record to this day. Manson was also team captain all three years, 1st Team All-SCIAC, 1995-97, and All-Far West All-American in 1995. Manson describes himself as a son to Michael and Debbie Manson—brother to Missy and Matthew—proud Uncle to Katie, Sarah, and Banyan—dog dad to Arrow. He is also a Primary Document Collector—Runner and Spartan Champion, and a self-proclaimed professional fisherman.

Bob "Mr. Whit" Whitaker P’85, ’89, ’96, GP ’11 has been an avid sports fan his entire life. Born and raised in Chicago, Illinois, he grew up loving all things Chicago—except the White Sox! No self-respecting Chicagoan roots for both the “Cubbies” and the White Sox. In the early 1960s, Whitaker and his wife, Adrian, loaded up the family wagon and purchased a home in Whittier. The Whitakers would go on to raise four tremendous children, three of whom would go on to attend Whittier College. His love for Whittier College athletics started in the 1970s when he and his boys would regularly attend football and basketball games on the Poet campus. When Whitaker retired from Clayton Industries, he became a regular at all Poet home games. In fact, he attended so many games that students often would ask him what class he was teaching. For many years, Whitaker served on the Purple & Gold board and participated in numerous tailgate parties as grill master! Every year, he volunteers as the “hydration specialist” at the annual P&G Golf Tournament. He always had a “great game” comment for every Whittier College student-athlete he came in contact with.

Following a successful high school career, Tony Woods ’83 enrolled at Whittier College in the fall of 1979. At Whittier, Woods was a two-time 1st Team All-American and would become the only NCAA Division III and SCIAC baseball player to be selected in the 1st round of the Major League Amateur Draft. In 1982, Woods was selected as the 17th overall pick by the Chicago Cubs. A broken hand derailed a promising career, but he would go on to play eight seasons in the minor leagues, seven with the Cubs and one with the White Sox. Woods played in 672 minor league games, posting a .254 career batting average with 48 home runs, 295 RBIs, and 74 stolen bases. After baseball, Woods worked in the hospitality industry as a general manager for several five-star hotels in the San Francisco Bay Area. Today, Woods works in the auto industry and makes his home in Vallejo, CA with his wife of 37 years, Alesia. They have three children and two grandchildren.