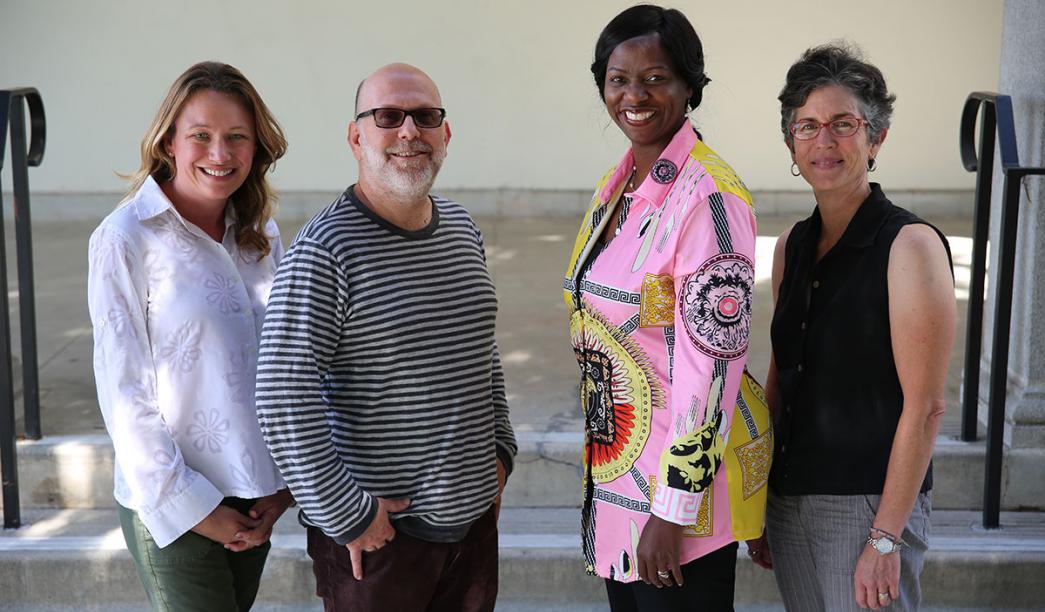 AROUND THE ROCK Winter 2020

President Linda Oubré announced the appointment of six faculty members to endowed professorships in a variety of disciplines.

These appointments recognize the chosen professors' outstanding academic accomplishments and teaching excellence, and are intended to support future scholarly growth.

Associate Professor Hector Valenzuela previously served as the Campbell Chair and his focus involved research on the aging of the immune system. He has also worked on training and educating research students.

The Roy E. and Marie G. Campbell Distinguished Chair in Biology was established by Dr. Roy E. Campbell, Director of the U.S. Entomological Laboratory, which supports a distinguished faculty member in biology and assists the College in enriching teaching and research activities.

The Hazel Cooper Jordan Chair in Arts and Humanities was established with a gift from Chester McCloskey ’40, and his wife, Olive ’44, in memory of Olive’s mother. Its purpose is to maintain and enhance Whittier College’s contribution to the languages and the humanities.

Bauer specializes in physical chemistry and nanotechnology, which she most recently began to apply to alternative energy sources, including solar cells and fuel cells. Students at Whittier have presented and published works with Bauer related to designing, synthesizing, and characterizing nano-materials with unique designs to function in these applications. Christina said, “I view including students in research as a crucial step to preparing them for the next stages of their career. Whittier College offers me the best of both academic worlds—good students to connect with in courses, and support to conduct relevant research with them.”

Associate Professor Ralph Isovitsch previously severed as the McCloskey Chair and has published many peer-reviewed papers, presented posters whose subject matter is in the areas of organic chemistry, physical chemistry, analytical chemistry, computational chemistry and/or medicinal chemistry. Isovitsch said, “Whittier students are the reason I do research I want them to have a rigorous research experience with the possibility of attending national scientific meetings and achieving a peer-reviewed publication.”

The Chester and Olive McCloskey Endowed Chair in Chemistry was established by alumni Chet '40 and Olive '40 McCloskey in 2007, and is designed to support the teaching, research, and service of an inspirational and dedicated professor.

The C. Wright Mills Endowed Chair in Sociology
Professor of Sociology Rebecca Overmyer Velázquez has been appointed C. Wright Mills Chair in Sociology for 2019-2020. Overmyer Velázquez is a public sociologist whose activist and applied scholarship is focused on engaging publics for social justice and social change. She engages with local community members, journalists, politicians, and government agency officials through communications media like the Groundtruthing California web site she built with her student, Elvira De La Torre; blogs on the website and Facebook page of the environmental justice community organization she coordinates; and the letters and documents she writes and presentations she makes to community groups, regulatory agencies, and politicians commenting on environmental law and policy. She has been a social movements scholar for over 20 years––writing articles and a book and teaching about social movements––and this research and teaching informs her public sociology, which then informs what she teaches in the classroom.

Professor of Sociology sal johnston was appointed the inaugural C. Wright Mills Chair in Sociology. Given that he is currently serving as interim vice president of academic affairs and dean of faculty, he will not be serving as Chair for 2019-20.

The endowed professorship was made possible through the generosity of the late Professor Emeritus Les Howard ’62. Howard’s desire was that the Chair would apply sociological theory to practice within a local or international community; promote social justice, especially for the disenfranchised; and use the resources of the appointment for student-centered activities.

Professor Wendy Furman Adams previously served as the Upton Chair. She said, “The Upton fund allowed me to add enrichment to my students’ lives in ways I would not have been able to do otherwise.”  Furman Adams has supported alumni, current students, and given support to junior faculty.

The Albert Upton Endowed Chair in English Language and Literature commemorates the director of Whittier’s earlier liberal education curriculum, the general studies program, and the designer of a semantically-oriented first-year English course. The holder of the Upton Chair is committed to teaching, writing, and plays an important role in the College’s writing program.

The Nadine Austin Wood Endowed Chair in U.S. History
Shannon Stanton Agbotse has been named the next Nadine Austin Endowed Chair in U.S. History. Stanton Agbotse teaches about the history of education in this country. Her classes deal with U.S. history in fundamental ways, particularly addressing the ongoing challenges of getting young people to engage with their nation’s history. Stanton Agbotse’s teaching in the Department of Education and Child Development trains the next generation of social studies teachers, thus her work extends well beyond Whittier’s classrooms to school districts around the state. Stanton Agbotse invites our students—especially our future teachers—into her research, and they collaborate to create African American history curricula for a new generation of learners. Her courses also serve the new Africana and Black Studies minor. Stanton Agbotse teaching and research reflect the spirit and mission of the Wood Chair.

Nat Zappia was the previous Wood Chair but has recently taken a position as Director for the Institute for Sustainability at California State University, Northridge.

The Nadine Austin Wood Chair in U.S. History was named in honor of Nadine Wood, deceased spouse of Donald “Bill” Wood.  Nadine was a passionate advocate for history education, and she dedicated much of her energy to insuring that all citizens could learn their history—at both the national and local levels.

The C. Milo Connick Endowed Chair in Religion was named in honor of C. Milo Connick, Professor Emeritus of Religion and College Trustee. This endowed chair provides funds for support of distinguished faculty in the field of Religion.

The Richard and Billie Deihl Distinguished Chair was established by Richard Deihl ’49 and his wife Billie ’50 to provide funds for support of a distinguished scholar.

The Douglas W. Ferguson Endowed Chair in International Economics
Professor Roger White has served as the Douglas W. Ferguson Endowed Chair in International Economics and will continue in his role as Chair. His research largely focuses on topics relating to cross-societal cultural differences/distance, the immigrant-trade link, immigration policy/history, public opinion towards economic globalization, and the consequences of increased international trade for domestic labor. White has worked on additional topics related to international trade and development-related topics such as multidimensional poverty and microfinance. His primary objective is to contribute empirical studies that foster a greater understanding of economic phenomena and, specifically, of international interactions. He is also the author of more than forty published research articles and book chapters, and he is the author or editor of seven books.

The Douglas W. Ferguson Endowed Chair in International Economics was named in honor of Douglas W. Ferguson, a long-time member of the Whittier College Board of Trustees. The chair was endowed at the time of his retirement as chief executive officer of the Quaker City Federal Savings and Loan. The endowed chair provides funds for support of a distinguished faculty member.

The W. Roy and Alice Newsom Endowed Chair in Chemistry was named in honor of the late Roy Newsom, tenth President of Whittier College, and his wife Alice. The Newsom Chair provides support for an outstanding scholar in Chemistry.