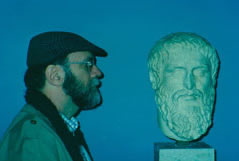 Professor David Hunt is the author of some 40 scholarly articles, which have appeared in such journals as Philosophical Studies, American Philosophical Quarterly, International Philosophical Quarterly, Religious Studies, and International Journal for Philosophy of Religion. He serves on the Editorial Board of Faith and Philosophy. He is the recipient of three awards from the National Endowment for the Humanities, two fellowships at the Center for Philosophy of Religion at Notre Dame, and residencies at the American Academy in Rome and the American School for Classical Studies at Athens.

Hunt is currently working on a book on the problem of divine foreknowledge v. free will, funded by a grant from the Templeton Foundation’s Big Questions in Free Will Project. His other interests include film, classical music, novels and history books, and foreign travel. He endeavors to involve students in these vices by incorporating film and fictional literature into many of his lower division courses and leading study tours of Italy and Greece.