Experiencing Religion on the Islands of Indonesia

Experiencing Religion on the Islands of Indonesia 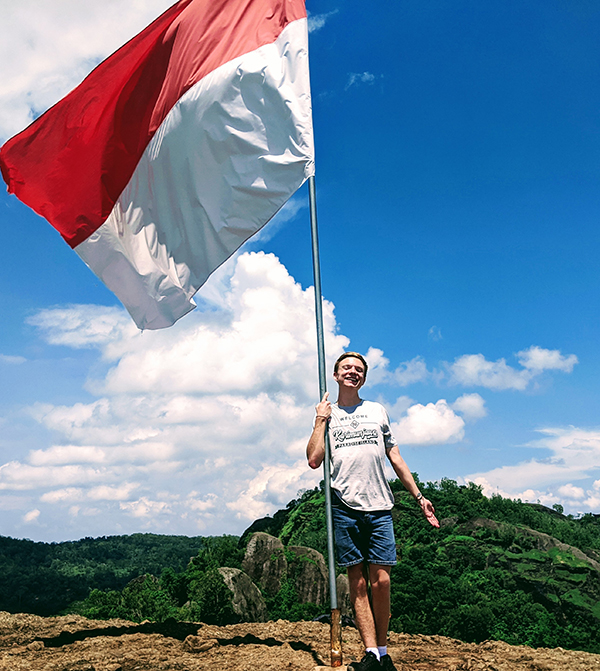 On the islands of Indonesia, Ryan Smith ’21 is learning about different faiths, including Hinduism and Islam, with the hopes of bringing back a better understanding of these religions.

The religious studies major is spending a semester abroad to research the Javanese mystical practice of Kebatinan. His work will address how religious traditions and indigenous practices coalesced to form this mystical tradition. He’s also taking the opportunity to deepen his studies on Hinduism and Islam.

Living and learning on the other side of the globe has been an adjustment. His shower is a cold bucket of water, and of course there’s the language barrier. But despite the obstacles, his host families have made him feel at home while he conducts his research.

On the island of Bali, he’s stayed with a Hindu family, who has invited him to a house consecration and temple celebrations. Thanks to their help, he’s witnessed authentic Balinese spiritual experiences that could never be duplicated in a classroom or on a tour.

“I have seen the immense work and amount of time that goes into creating offering baskets and altars to ensure a new home is protected from evil spirits,” Smith said. “I have seen incredible displays of faith wherein people enter states of trance to drive away demons from their village.”

On the volcano-dotted island of Java, he’s stayed with a Muslim family who “truly taught me about an Islam not often portrayed in American media,” he said. Indonesia is home to almost 13 percent of the world’s Muslims, the most of any country in the world. Smith’s host father in Java drove him around nearby villages for hours to find spiritual leaders to interview, showing him the thirst for spiritual wisdom that the Javanese people share.

“It has been great to dispel many of the misconceptions many Americans have about the religion,” he said.

Indonesia isn’t Smith’s first time abroad. Last year he had studied in India, one of the most religiously diverse countries in the world. He got there with the help of the Global Poet Scholarship: $2,000 for all Whittier students to study abroad through the Office of International Programs. But because it has so many large faith groups, Smith said he was unable to delve deeply into specific traditions. Indonesia, on the other hand, became his opportunity to immerse himself in Hindu and Islamic cultures.

He’s already seen how the Hinduism they practice differs from that in India.

“There is such a beautiful blend of their traditional animistic spiritual practices and Hinduism, which came after contact with India and Java,” he said.

The federal government has been making Smith’s time abroad easier to afford. Smith is the recipient of the U.S. Department of State’s Benjamin A. Gilman International Scholarship, which supports students with $5,000 to study or intern abroad. He also won the Critical Need Language Award, a scholarship of up to $3,000 to study another language in a country deemed a critical priority by the U.S. Department of State.

Learning the country’s language day by day, making real progress in his communication with locals, has been an incredibly rewarding academic experience, Smith said. He hopes to leave Indonesia prepared to give people an accurate picture of a country that he says is often misunderstood.

“What is really important is going into the field and viewing the lived religious practices for yourself and the Gilman really has given me such an incredible opportunity to do so,” Smith said in a blog post for the Office of International Programs.

His time in Indonesia is leaving him with exciting opportunities for his immediate future. He hopes to return to the United States with enough proficiency in the Indonesian language to return to the islands after graduation to continue his research. Thanks to the Gilman Scholarship, he also has an opportunity to use the skills he’s picked up in Indonesia to apply for work with the federal government.

“There are so many amazing opportunities for employment following my graduation because of this program,” he said in the blog post.