An impressive roster of social justice scholars will be sharing their expertise and engaging in dialogue with the Whittier College community as part of the 2022 Les Howard Social Justice Series.

The program is headed by Professor of Sociology Rebecca Overmyer Velázquez, the C. Wright Mills Endowed Chair in Sociology. The series is named in honor of the late beloved sociology professor Les Howard '62, who left an endowment to support Whittier College and student learning.

“With the support of Hartley House, the series this year focuses on critical perspectives on race and racism, power and privilege in the U.S. and South Africa,” said Overmyer Velázquez. “We invite students, faculty, and staff to participate in these conversations with the preeminent scholars and practitioners who will share their ideas with us at Whittier College.” 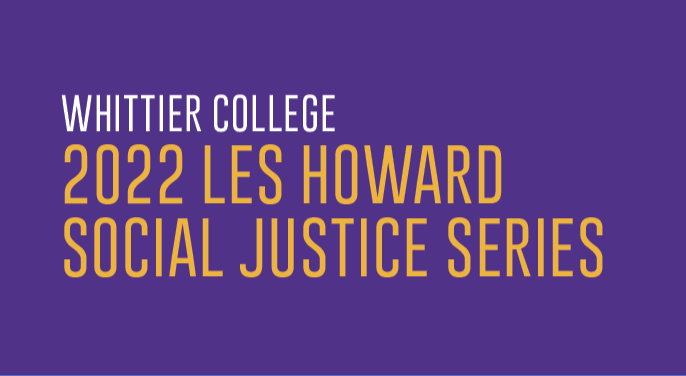 Prof. Myisha Cherry's research interest lies at the intersection of moral psychology and social and political philosophy. In her talk, Cherry focuses on Baldwin's moral psychology of anger in general, and black rage in particular, as seen in his nonfiction. Baldwin’s theoretical account of Black rage, She’ll argue, dignifies Blacks by centering them as people with agential capacities and also provides them with a pragmatic politics of rage that is useful in the fight against white supremacy and racial injustice.

Drawing on over two years of ethnographic fieldwork in San Diego County and Orange County, anthropologist Linda E. Sanchez's research investigates how members of the 1.5 generation were excluded from DACA through restrictions such as age requirements, and the barriers faced by people who did qualify for DACA.

What's Authenticity Got To Do With It? Coconuts, Hybridity, and Suspicion Among Young Black people in South Africa
Nosipho Mngomezulu, Ph.D., University of the Witwatersrand (Johannesburg)
Thursday, April 14 || 7 p.m. || Hartley House

Anthropologist Nosipho Mngomezulu's research, entitled Re-imaging the Nation focused on young people’s constructions of nationhood on the island nation of Mauritius. The research, undertaken during the world’s first-ever Truth and Justice Commission to focus on slavery and indentured labor, examined youth identification practices on- and off-line, intergenerational conceptions and experiences of trauma, national identity, and transnationalism. She completed a Ph.D. in social anthropology from Rhodes University in 2014. She is currently a lecturer at the University of the Witwatersrand and living in Johannesburg.

Prof. Jane Yunhee Jun is the author of five books on political participation and public opinion in the United States. Her most recent book The Politics of Belonging: Race, Immigration, and Public Opinion (with Natalie Masuoka), was published in 2013 by the University of Chicago Press.

Prof. Proudfit serves as Professor and Department Chair of the newly established American Indian Studies Department at CSU San Marcos. She is also the Director of the California Indian Culture and Sovereignty Center (CICSC) at CSUSM. Proudfit is the founder and executive director of the California American Indian & Indigenous Film Festival, which is presented by the CICSC every November.