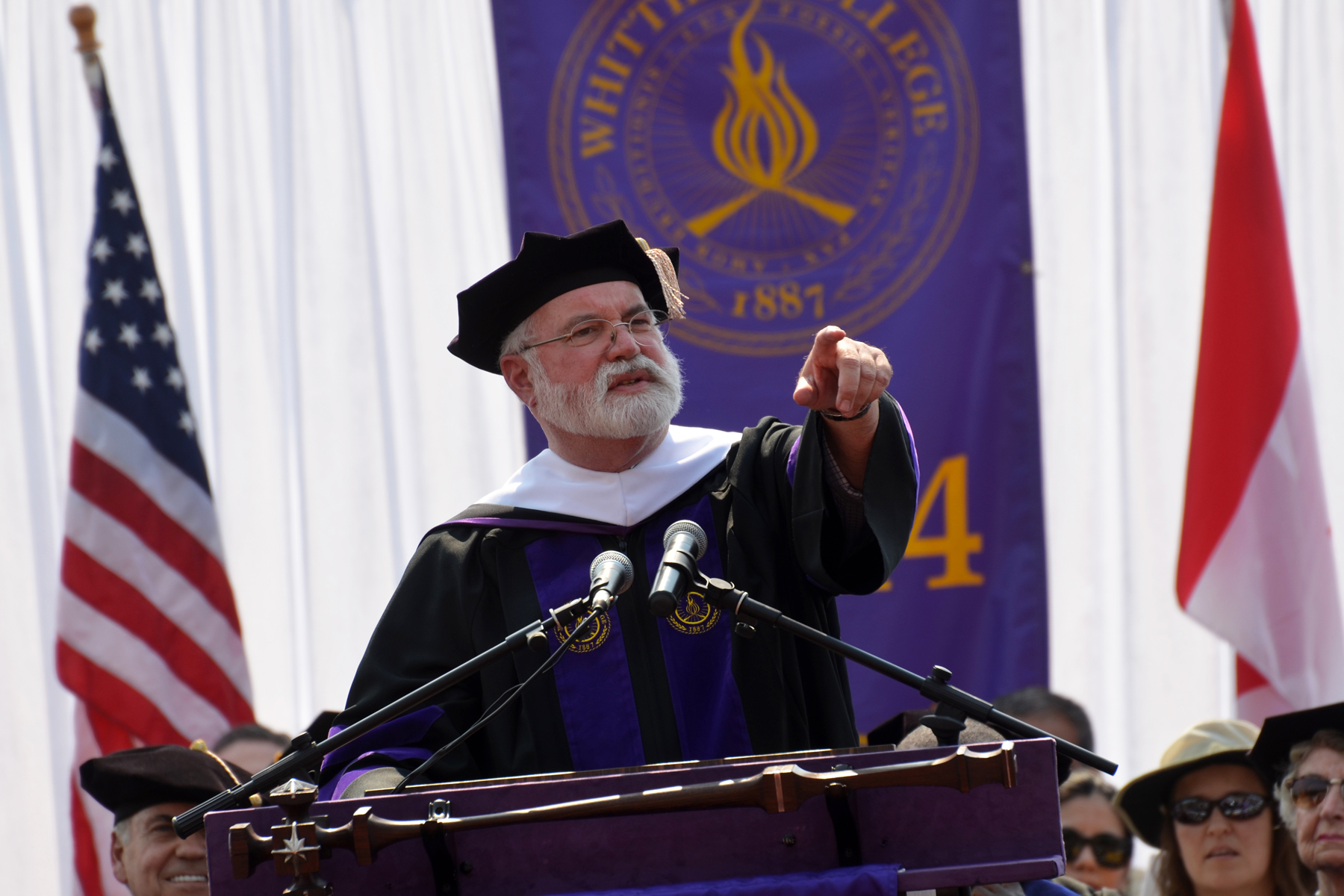 The Poet Mary Oliver writes, “There are things that you can’t reach. But you can reach out to them, and, all day long.”

What we reach out for, I think, is the creation of a community of kinship such that God in fact might recognize it. You want to obliterate the illusion that we are separate—that there is an “us” and a “them.” The truth is that there is just “us.”

And so you imagine a circle of compassion and then you imagine nobody is standing outside that circle. And to that end, you want to obliterate the margins that keep us from each other. You want to stand at those margins, and then look under your feet and discover that the margins are getting erased, because you chose to stand there with the poor, the powerless and the voiceless, with those whose burdens are more than they could bear, with those whose dignity has been denied, with the demonized so that the demonizing will stop, and with the disposable so that the day will come when we stop throwing people away.

If your goal is kinship as graduates of this institution, then you will not be promoting justice with your life, you will in fact be celebrating it.

So there I am in a car with two older vatos, Manuel and Pancho. They work at Homeboy and we’re giving a talk somewhere, and Manuel is in the front seat and we’re on the road real quickly. And suddenly he gets an incoming and he reads his text to himself and he laughs. And I say, “Well, what is it?” And he says, “Oh, it’s dumb. It’s from Snoopy back at the office.”

I had just seen Snoopy as the day began; I gave him a big abrazote. Snoopy and Manuel work together around the clock-in room, where they clock in hundreds and hundreds of our workers. And I said, “What’s he saying?” And he says, “Well, it’s dumb. Hang on a second…Hey, dog, it’s me Snoops. Yeah, they got my ass locked up in county jail. They’re charging me with being the ugliest vato in America. You have to come down right now and show them they’ve got the wrong guy.”

It got me laughing, but then I realized that Snoopy and Manuel are enemies. They are from rival gangs; they used to shoot bullets at each other, now they shoot text messages.

And there is a word for that and the word is kinship—how do we dismantle the barriers that exclude, how do we remind ourselves that we belong to each other, how do we enter into this exquisite mutuality with each other.

Probably one of the great privileges of my life was knowing Cesar Chavez as a friend. I remember once he had told a reporter who commented to him, and said, “Wow, these farm workers, they sure love you.” And Cesar just shrugged and smiled and said, “The feeling’s mutual.” And of course that’s the whole point—how do we enter into this mutuality with each other, where there is no daylight that separates us, where there is kinship which is God’s dream-come-true for us. Or as Jesus says that you may be one.

At Homeboy Industries, 15,000 folks a year walk to our doors and we try to help them redirect their lives, with training programs and tattoo removals, and such, and eight social enterprises. And one of them is the Homegirl Café where women with records, young ladies from rival gangs, waitresses with attitude will gladly take your order.

And a lot of celebs come in once in a while. We had Jim Carrey the other day and we had the entire Dodger team there for lunch. It was pandemonium.

But one day we had, Diane Keaton, Oscar-winning actress and big movie star, come in for lunch. And her waitress that day was Glenda. And Glenda is a homegirl, who’s been there done that, a big girl, tattooed, gang member, parolee. She doesn’t know who Diane Keaton is. So she’s taking her order and Diane Keaton says, “What do you recommend?” And Glenda rattles off the three platillos that she particularly likes and Diane Keaton says, “I’ll have that second one. That one sounds good.”

And at that moment something dawns on Glenda, she looks at her and says, “Wait a minute. I feel like I know you from somewhere. You know like maybe we’ve met.” And Diane Keaton decides to deflect it humbly, “Oh gosh, I suppose I have one of those faces that people think they’ve seen before.” And then Glenda goes, “No, now I know. We were locked up together.”

Yeah, that just took my breath away when I heard that, and I don’t believe that we have had any further Diane Keaton sightings now that I think about it. But suddenly it came up so quickly Oscar-winning actress and attitudinal waitress, exactly what God had in mind.

At Homeboy Industries, enemies work together and that’s certainly dicing it at first. A homie will say, “I’m ready, ready, ready.” And I’ll say, “We have an opening in the bakery, but you’ve got to work with X, Y, and Z." And I rattle off the names of enemies, and they always say the same thing, “I’ll work with them, but I’m not going to talk to them.” That bothered me in the early days, but not so much anymore, because I know now that it is impossible for human beings to demonize people that they know. You can’t sustain that.

So I had a young homie, 19 years-old, a little guy, everyone called him Youngster. I thought he was ready, so I bring him into our Homeboy silk-screen factory, it’s been round for twenty years. I introduce him to all his 30 coworkers, many of them rivals and enemies. I watch him shake hands with each one; I think, “Wow, this is great.”

Until he gets to the last guy, a guy named Puppet, and when Puppet and Youngster are in each other’s vicinity, they mumble something, they stare at their shoes, and they don’t shake hands. Well, I know that they are enemies, because I know what gangs they are from, but he just finished shaking hands with other enemies. I discover later that this is a hatred that is really deep and personal and beyond which neither of them think that they can get passed. I sense that much at the moment. And I say, “Look, if you guys can’t work together, let me know. I’ve got a lot of people who want this job.” So calladitos, they don’t say a word.

But six months later, Puppet leaves his house to go to a corner store a short distance from his home and he buys something, but on his way home for some reason he takes a shortcut, he dodges into an alley, and because he’s taking this detour, suddenly and unexpectedly he’s surrounded by ten members of a rival gang. Ten against one. And they beat him badly and while he’s lying on the ground, they will not stop kicking his head, until he’s lifeless. Somebody finds his body and takes him to White Memorial Hospital where he’s declared officially brain dead. But they keep him connected to machines for 48 hours, so that he can get two full days of a flat-read, no brain activity, so that the doctors can sign the death certificate.

This allowed family and friends to gather. I was at St. Louis University giving a talk, I flew home immediately. I’ve seen a lot of horrible things in my life, but nothing compared to the sight of this young man with his head swollen many times its size—it was horrifying, you could barely train your eyes on him. At the end of the 48 hour period, I gave him a blessing as a priest, I anointed his forehead, we disconnected, and a week later we buried him.

But in the first 24 hours, while Puppet was lying beaten in the hospital, I was alone in my office, it was 8:30 at night, the phone rings, and it’s Youngster, Puppet’s coworker. And he says, “Hey, that’s messed up about what happened to Puppet.” And I say, “Yeah, it is.” And then with a certain kind of eagerness even, he says, “Is there anything that I can do? Can I give him my blood?” And we both fall silent under the weight of it. Until finally he breaks the silence, choking back his tears and says with great deliberation, “He was not my enemy. He was my friend. We worked together.”

Can I say that that always happens at Homeboy Industries? Of course it does. An exception, not a single one. It should not surprise us that God’s own dream-come-true for us—that we be one—just happens to be our own deepest longing for ourselves. For it turns out, it’s mutual.

So Whittier is not the place you come to, it is and always has been the place you go from. And you go from this place to create a community of kinship, such that God in fact might recognize it. So you choose to dismantle the barriers that exclude. For the vision still has its time, pressing on to fulfillment, and it will not disappoint. And if it delays, wait for it.

Congratulations, and God bless you, Class of 2014.