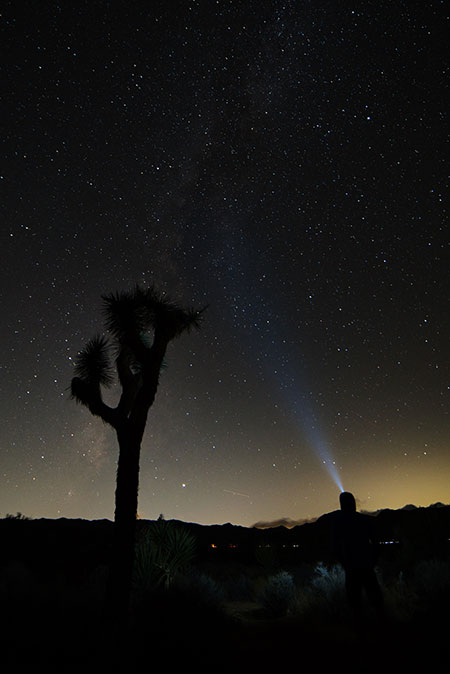 Madeline Acosta ’23 gained a new sense of appreciation towards astronomy thanks to the semi-annual Star Party.

“I wanted to take this opportunity to finally get to enjoy them (the stars) without the city lights getting in the way,” said Acosta, a biology major.

The Physics Club hosted the fall outing for students of any major on November 8 at Joshua Tree National Park. There, 40 students camped overnight while observing the moon and the stars.

When the students arrived, they were greeted by a beautiful desert landscape sought after for its stellar stargazing. Almost everyone in the United States lives somewhere where artificial light obstructs their view of the cosmos—but in the park, the skies are so dark and so clear that dozens of Whittier students could enjoy sights that were, quite literally, out of this world.

At Joshua Tree, students like Acosta were able to use a high-powered telescope to see the craters on the moon and multiple constellations.

“Around midnight, we took a hike into the desert trails and were able to make it through to an open valley where we at in silence and watched the stars,” she said.

The Physics Club provided students with transportation, tents, and food for the event. Students left Whittier College at 5 p.m. and arrived back on campus the next day around noon after sleeping under the stars.

“Being able to go to sleep while looking at constellations is something I will never forget,” Acosta said.