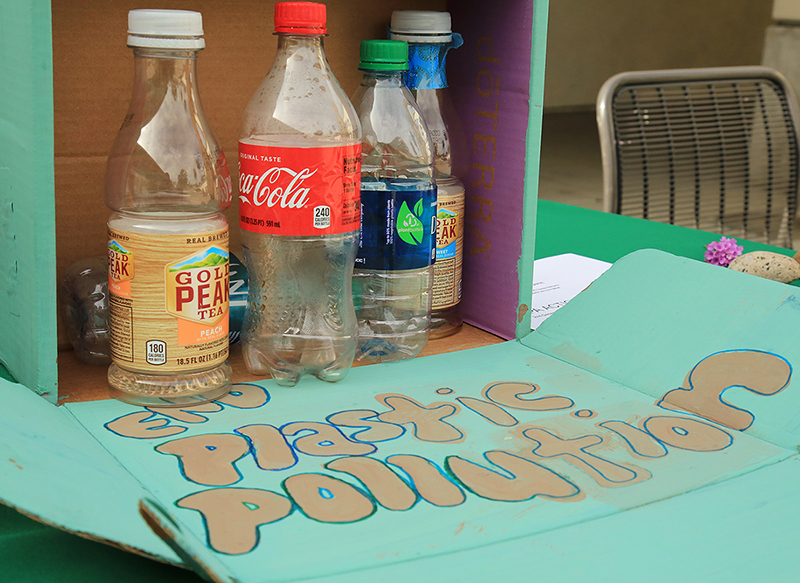 Gathered in Campus Center in early December, students in assistant political science professor Sara Angevine’s media and the political process course presented their findings during the second-annual EPA Action Day. Commemorating the establishment of the Environmental Protection Agency by Richard Nixon ’34, EPA Action Day was not just about students demonstrating their research about threats to the Earth’s ecosystems. At each of their tables, they also offered ways for anyone to get involved in solving these problems, such as signing a petition to enact change.

Will Bryan ’23, who’s considering majoring in business administration, was by his team's table gathering signatures to install more clothing recycling bins around campus. Whittier College currently has one near the residence halls, but Bryan would like to see more closer to Campus Center.

“We’re trying to spread awareness of the clothing industry’s amount of pollution that’s being done,” he said. He pointed out that its impact on the Earth is second only to the oil industry, with polyester fibers that end up in the oceans as the leading culprit. “One way to counter this is to get more biodegradable fibers, something that will make it degrade faster. Another is to reuse clothing; that’s what we’ve been trying to do.”

Students identified both large-scale problems and related local issues, and how students could mobilize to address both.

Political science majors Sumitra Bernardo ’21 and Karen Romero ’21 discussed how they examined how some recyclable plastics aren’t recycled properly and wind up in waste dumps. They want to hold corporations accountable for their role, but they want to see more recycling bins around campus, too. On a personal level, their work on the project reminded them about the importance of being conscientious consumers, as well.

The students also produced campaign videos for their projects, which screened in Club 88.