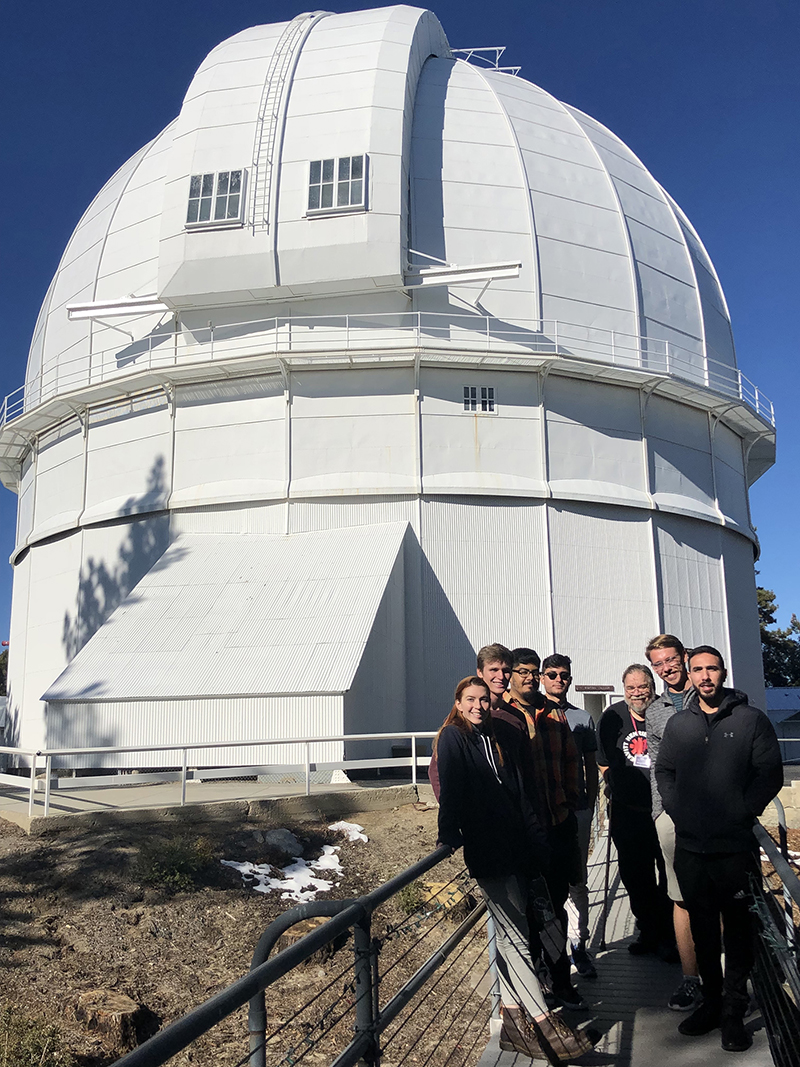 Standing in the landmark observatory atop Mount Wilson, Aaron Mendoza ’20 not only stepped into an amazing place to glimpse the wonders of space, but into the footsteps of astronomy legends, as well.

Mendoza and five fellow members of the Whittier College Physics Club recently took a break from their classroom studies to enjoy a docent-led tour of the Mount Wilson Observatory, which is stationed high atop the nearby San Gabriel mountains.

Excusing himself for “nerding out”, the physics major was impressed to stand where Albert Einstein and Stephen Hawking once did. (Their tour guide even showed them where Hawking left his thumbprint in the guest book.) The Mount Wilson Observatory’s telescopes—which at times were the largest of their kind in the world—have extended astronomers’ visions into the cosmos for decades, leading to mind-blowing discoveries like the universe’s continuing expansion. Even competing with the bright lights of Los Angeles, the site continues to serve as a great resource for scientific discovery—one that club president Cassady Smith ’20 wanted her peers to learn more about.

“There are so many historical and outstanding landmarks for physics and engineering in Los Angeles that it would be a shame not to explore them,” said Smith, who plans excursions for the club at least once a year.

When they arrived, a docent gave them a private tour of the grounds, including the 150-foot solar tower where astronomers can safely study the sun. A scientist showed them some of his previous drawings of sunspots, some of which had bigger diameters than Jupiter. They marveled at a photo hanging on the wall showing Einstein and Hawking’s visits to the same room they were in, and at Mount Wilson’s two powerful telescopes.

“Not only did I get a better insight to how important and useful the observatory is, but how much effort, time, and money was put in to be able to make it happen,” Mendoza said. “So many years ago, people understood the benefit of knowing what really is ‘out there’ and we've still only scratched the surface.”

Smith pointed out that a lot of museum and observatory tours are “very commercialized,” and artifacts are kept behind glass and some of the most important ones aren’t even displayed. But this experience was different.

“The most memorable aspect of this tour was how open the observatory was with its history,” she said. “As visitors, we didn't feel like we were tainting the history by walking through the telescopes or touching all the old equipment they had openly placed, like it hadn't been moved since it was put there. It felt like we had travelled in time.”

Smith added that as aspiring physicists, literally walking in the footsteps of discoverers before them made feel like they could make their own discoveries, too.