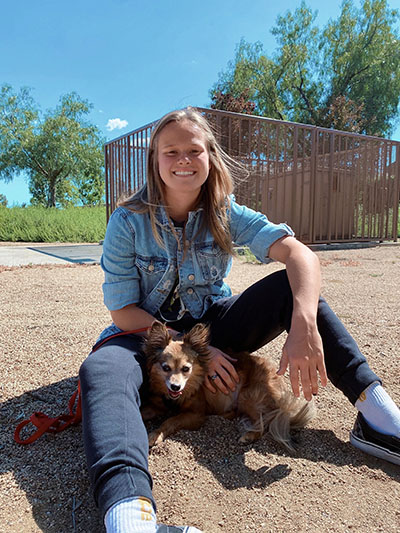 Whittier College student Emily List ’23  is co-founder of OC Pom Rescue, a Pomeranian and small breed dog rescue based in Southern California. There, they train and socialize dogs that have ‘extreme behavioral issues’ such as possessiveness, unprovoked aggression, biting, and more, helping to make them more adoptable.

“When I first got into dog rescue, I was in middle school and had absolutely no idea what I was doing—it took lots of trial and error, talking with experienced dog advocates, and online research.”

List’s first canine pet, Molly, and later, a dog she fostered, Luna, showed her that each dog had their own personality. They influenced her to start doing research on dog behavior. In particular, she learned about behavioral issues that occur due to abuse or neglect. Eventually, she began volunteering with Wetlands and Wildlife Care Center in Huntington Beach, working with dogs labeled as “aggressive or fear biters.”
Through her experience volunteering and fostering animals, List seeks to further educate herself and educate others through her time and work with OC Pom Rescue.

At OC Pom Rescue, dogs' needs are addressed and are rehabilitated from their learned habits.

“I stand by the belief that all dogs have the capability of being rehabilitated, given that they get the help and resources that they need to be their loving selves,” said List in a recent interview with VoyageLA.

A typical day for List consists of training and exercising with foster dogs where she focuses on meeting training goals such as leash training and basic commands. She also drives to shelters, schedules adoption meetings, and drives to vet appointments.

As a student as well, she manages her time and energy so that she is able to balance her academic goals with her dog rescue work.

List said, “I am eagerly looking to pursue a career in research that is focused on ecological conservation. I plan on continuing my dog rescue work, where I can educate about responsible dog ownership and advocate for dogs that have long been considered as objects”.

List is pursuing a bachelor’s degree in environmental science and plans to use her education in her advocacy work and build a career in wildlife conservation.

“I am passionate about animal welfare and environmental conservation, and Whittier College is equipping me with the knowledge and skill set to be able to make a sound difference in the world,” she said. “As an advocate for animal welfare and environmental justice, I believe that education should be the highest priority in order to see concrete progress through individual efforts and mindful corporations. Whittier College has given me the opportunity to meet like-minded and enthusiastic individuals, who have actually helped me in my dog rescue efforts.”