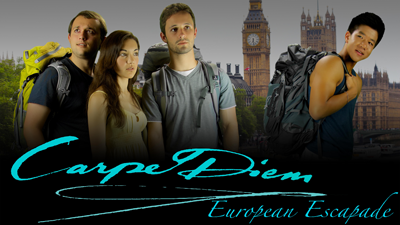 When Eric Hinwood ’16 graduated high school, he traveled to Europe with a group of friends to produce his first feature film, Carpe Diem: European Escapade. The film has now secured international distribution through Amazon Prime.

Hinwood began his career by acting in high school theatre productions, and wrote the film when he was 17. After several weeks of filming in locations such as London, France, Barcelona, Hollywood, and Whittier, he began the multi-year process of polishing the film for release.

His passion for filmmaking led him to design his own major through the Whittier Scholars Program combining film production and business. He also double-majored in French and minored in Spanish. During his time at Whittier—and with the help of his professors and classmates—Hinwood took his film through post-production and became established as a working actor and filmmaker. Former Whittier College film instructor Rich Cheatham ’68 was one of the first people to watch the film and helped Hinwood make editing decisions.

While it took several years to finalize the film, Hinwood was always driven by his passion for the project. “I realized that if I’d given up anytime in the past seven years, this film would never be released and all that work would be for nothing. I couldn’t let that happen,” he said.

Hinwood now has more than 60 films under his belt and has worked as an actor, director, writer, and producer. He also continues to work with his fellow Poets, including 14 alumni credited in the film.

Carpe Diem: European Escapade has been available in Canada, Ireland, the Philippines, Scandinavia, South Africa, the Caribbean, 20 countries in East Africa, 14 countries in Oceania, and will be available in the United States on Amazon Prime on January 23.