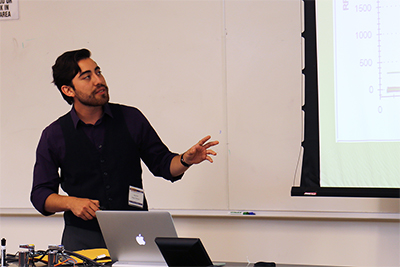 A. J. Villalobos Hall buzzed with chatter as dozens of student researchers expertly shared their findings, demonstrating the variety and quality of their investigative work.

Among them was Vanessa Guerra ’19, a child development major who aspires to become a teacher, who was explaining gender stereotypes’ effects on students. She succinctly and confidently explained the effects that negative stereotypes have on a student’s academic journey and the positive impact even one teacher can have to counteract them.

She was among the many Whittier College students who shared their research with an audience of peers, professors, and visitors at the 9th annual Undergraduate Research, Scholarship, and Creative Activity (URSCA) conference. Besides the nearly 60 poster presentations in Villalobos, classrooms in the Science & Learning Center served as stages for more than 90 other students to summarize their hard-earned findings.

URSCA highlighted the impressive range of students’ work. Over the course of the day-long conference, presenters covered everything from gender pay gap examinations to the effects of domesticating hermit crabs, from the impact of exchange rates on international trade to understanding black viewership of media.

Not far from Guerra and her poster on gender stereotypes was biology major Jared Holguin ’19, talking to visitors about how extracts from green tea, goji berries, and red sage showed potentially promising effects on different cancer cells. It doesn’t feel real yet to Holguin that his four years at Whittier are nearly completed, but his research was great preparation for the exciting next phase: earning a master’s in pharmaceutical engineering.

The conference is more than a senior showcase. Whittier students have opportunities to get involved in hands-on research early on: as evidence, the URSCA schedule even included several first-years, who presented in small teams about their kinesiology projects.

Beyond URSCA, there are at least two more opportunities to enjoy student work. Starting this week, art projects will be on display in Greenleaf Gallery, and the Student Film Showcase takes place May 8 at Starlight Cinema in Uptown Whittier.