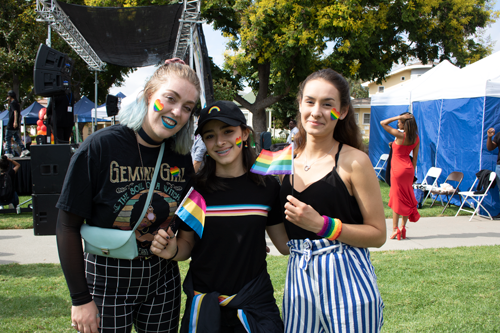 Queer folks and allies of all ages gathered to celebrate diversity and unity at the City of Whittier’s first ever LGBTQ+ Pride Festival, this past Saturday.

The festival, located in Uptown’s Central Park, saw hundreds of enthusiastic attendees—including many members of the Whittier College community. The event featured several musical and drag performances, booths from dozens of queer-positive organizations from Whittier and beyond, and a wedding in tribute to marriage equality. When the festival packed up for the night, the local celebration of pride continued down the block at the Whittier Queer Prom.

Members of the College’s TOBGLAD (Transgender, Other-identified, Bisexual, Gay, Lesbian and Allies for Diversity) club worked closely with local alumna Megan Hobza ’93 to organize the prom, which was an extension of the pride festival. There, students enjoyed music, dancing, mingling, and an evening full of LGBTQ+ culture. The night ended with a pose competition that harkened back to the influential drag ball culture of the 1990s, and resulted in three students being crowned Queer Prom Royalty.

Poets staged the event to raise visibility and funds for a forthcoming LGBTQ+ Resource Center in Whittier. Students from TOBGLAD have been collaborating with alumni and local contributors for months to fundraise and increase awareness for this cause, which is in its early developmental stages. Read more about the Center here.