Serving Up Warm Meals for the Homeless

Serving Up Warm Meals for the Homeless 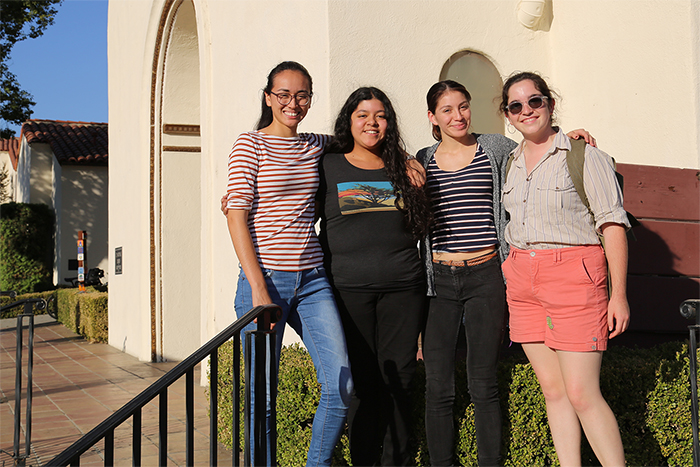 On a warm November afternoon, Whittier College students arrived at St. Matthias to deliver and help distribute food to the homeless.

People gathered around tables, benches, and under patio umbrellas in the church courtyard to enjoy the free meal, made possible in part thanks to the work of the Food Recovery Network. The College’s local chapter of the national non-profit gathers untouched food from the Campus Inn twice a week to deliver to the Episcopal church near campus. Carrying in entrees and sides, the students help ensure that the 80 to 100 people who arrive at the soup kitchen every weekday afternoon don’t leave hungry.

“Food waste is always something that upset me when I saw that it was happening. There’s so many people that go hungry every single day in the city of Los Angeles, Los Angeles County, in our own communities,” said Sydney Thiroux ’22, who’s double majoring in Chinese and Global and Cultural Studies. “To see that there was an organization on campus that was doing something about this problem, it really got me excited and I decided to join.”

Arriving at the back entrance to the Campus Inn kitchen before heading to the church, the club members picked up several tubs of new donations. On that early November afternoon, their latest collection put them at more than 1,500 pounds of food for the semester, so far. Since the Whittier chapter began in 2013, they’ve collected more than 21,000 pounds from the cafeteria.

They’re doing their part to make a dent in a national problem. Roughly 40 percent of all food in the United States goes to waste—while at the same time, more than 40 million people don’t have enough to eat on a regular basis, according to Food Tank, a non-profit dedicated to raising awareness of food issues. Last year, the non-profit applauded Whittier’s College chapter as a model for other colleges who want to help combat food waste and make a difference.

“I really appreciate that it takes an active step in trying to solve what it preaches,” said Aileen Figueroa ’20, a biology major and the club president.

When she joined, she was also impressed that the volunteers not only deliver the food, but choose to stay and serve in the soup kitchen, as well.

“That’s something that I really treasure and admire, and I’m so glad that I chose to be in this club,” she said.

The students’ help makes a big difference, said Dottie Andersen ’71, St. Matthias’ parish administer. She helps run the soup kitchen, which began 36 years ago with two people handing out soup and sandwiches to a few people. Now, they’re receiving donations from across the community—Panera, the Boy Scouts, the YMCA, individuals, and the Food Recovery Network, to name some—to feed dozens of people every day.

The benefits go beyond feeding hungry stomachs. Generally, homeless residents are used to being avoided. But in the courtyard of the church, they’re welcomed, they’re helped, and they can have a conversation.

During a Friday afternoon soup hour, Thiroux and Melissa Tobias ’20 received expressions of gratitude from soup kitchen guests as they poured them cups of juice. A social work and Spanish double major, Tobias has come to see a different side to a vulnerable and underrepresented population that’s sometimes cast in a negative light.

The same is true for Isabel Montero ’21, an English major and club treasurer. She’s come to recognize and know people who are homeless, putting real faces and identities to a hotly debated issue in Southern California.

“We get to know their names,” Montero said. “We give them respect and we actually talk to them. I think that’s really important.”

Bill Garrison, the church rector, remembers a Whittier College religious studies class visiting a while back, and the soup hour had started. When Garrison opened the door and showed them, “they just stood there and their jaws just dropped,” he said. “I think probably they don’t remember anything I said, but they remember seeing those people and realizing: ‘Oh my goodness. This is real! This is very much real.’”

“It’s the old story: Until you get to know the other, you’re afraid of them,” Garrison said. “But once you get to know that other, whoever that is, all of sudden, ‘Oh my goodness. They’re like me.’ I think that’s one of the things we provide for the community.”

The Whittier chapter of Food Recovery Network would collect food more than twice a week if they could—the cafeteria always has leftovers. But at the moment, the club is comprised of four students, and two will graduate this May. Anyone interested in joining can contact the club via email or by messaging them through the club’s Facebook or Instagram. Or, interested volunteers can arrive by the back entrance of the Campus Inn on Tuesdays at 4:30 p.m. and Fridays at 2:30 p.m., ready to help.