Graduating Early to Become an Optometrist 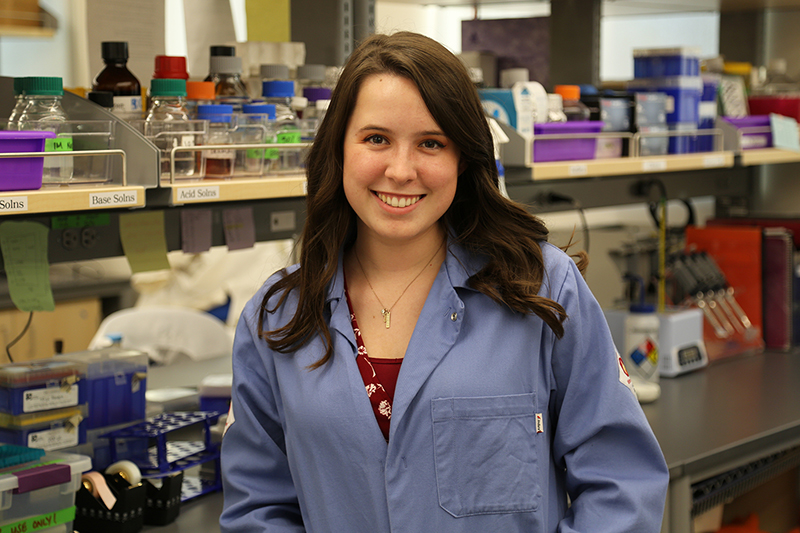 Rachel Villareal ’20 is graduating early to turn her childhood dream into her career.

She’s wanted to be an optometrist since she was 12 years old. As Villareal would get her vision checked, her conversations with the doctors about the science of the human body sparked her curiosity. Now, the biology major is graduating a year early and has already been accepted to one of the state’s top-ranked optometry schools, Marshall B. Ketchum University.

She got a strong start in biology professor Sylvia Lopez-Vetrone’s first-year writing seminar. In teams, she and her fellow students learned how to conduct real experiments to learn why cells go rogue in the human body while, at the same time, learning how to clearly and professionally communicate their findings.

“It was a big learning process, but it was a lot of fun,” said Villareal.

Lopez-Vetrone, the James Irvine Foundation Chair in Biological Sciences, noticed Villareal’s natural scientific curiosity in class and asked her at the end of the course if she would be interested in diving deeper.

She said yes and, with Lopez-Vetrone’s guidance, successfully applied for a National Science Foundation-funded mini-grant to conduct cancer research as she entered her sophomore year. Inspired by her upbringing in a mostly Asian community, Villareal proposed testing the effectiveness of bitter melon, a fruit commonly found across eastern Asia, in killing cancer cells.

Villareal tested a derivative from the melon on different cell lines, including breast, prostate, and leukemia cancer cells—and it was working. The next important question was why. Villareal investigated their causes of death during her junior year, essentially becoming a cell coroner.

Much of her research in the past two years has been supported by fellowships, including the mini-grant and the Barbara Ondrasik ’57 and David E. Groce SURF Fellowship. She credits Lopez-Vetrone, who is also the College’s fellowships director, with helping her learn how to successfully apply for the funding, as well as for helping her grow as a student researcher.

“She’s been a really great help and I’m really lucky to have her as my advisor,” Villareal said.

Besides a doctor of optometry degree, her post-graduate program offers her an opportunity to continue working in a lab and earn a master’s degree in vision science. It’s a space she feels confident in, thanks to her experience at Whittier.

“It’s helped me to grow not only as a researcher but also as a person, and being able to be more confident in who I am—not only in the lab, but outside in my classes, as well,” she said.