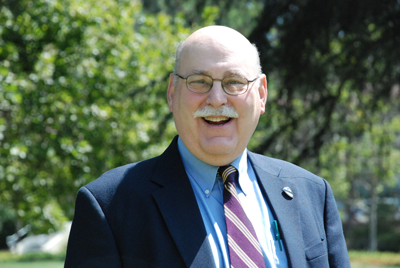 One of Whittier’s longest-serving and most popular professors, Fred Bergerson, passed away earlier today.

During his more than four decades at Whittier, Bergerson taught thousands of Poets in the political science department. His lively manner, devotion to his field, and dedication to the success of his students created a strong following among both students and alumni.

Bergerson earned degrees at Johns Hopkins and Vanderbilt Universities—between which he acquired his “other education” via the U.S. Army, specializing in military intelligence. He attained the rank of Captain, seeing action in Vietnam with the renowned 1st Cavalry (Airmobile) Division. He specialized in bureaucratic politics, international and homeland security policy, and civil-military relations. He taught courses from the fundamental, Introduction to Political Science, to the original, Federalism and Urban Life, and his signature JanTerm course, Warfare: Pursuit of Military Security.

In 2010, Bergerson led a group of alumni and friends of the College on a 10-day trip through Vietnam. For Bergerson, a Vietnam veteran, it was his first trip back in 42 years. With the 1st Cavalry, Bergerson participated in the relief of Khe Sanh and received a Bronze Star for his meritorious achievement in assisting in the planning of the successful relief of the base. During the return trip, the group journeyed from Ho Chi Min City (Saigon) to Hanoi, along the way stopping at various former military sites including Camp Radcliff, China Beach, My Lai, and Khe Sahn. On the last leg of the trip, Bergerson led the group in a remembrance ceremony at a rural site that was once LZ Evans to honor four fallen soldiers—Richard Frasca, Ray Robinson, Robert Wiedemann, and Ross Applegate—who served under him.

In the spring of 2018, Bergerson was honored for his amazing accomplishments at a farewell gathering at the College. He was surrounded by former students, colleagues, friends, family, and loved ones who all expressed their gratitude, fondness, and cherished memories of their time with him. View photos here.

Upon his retirement, Bergerson continued to occupy his time with familiar activities like talking with past students and “being actively aggravated” by politicians. About not being on campus on a daily basis, he said he would most miss his “extended family” at Whittier. He cherished the joy and insights shared between him and students over the years, as well as time spent with his colleagues, “raising questions about contemporary society, politics, policy, each other, students, the world, the future, and the past.”

“It means so much to me to have been surrounded by such wonderful people,” reflected Bergerson, “people whose lives I have changed, and who have changed my life.”

Vice President of Academic Affairs and Dean of Faculty Darrin Good remembers Bergson and said, "Fred Bergerson touched the hearts and minds of innumerable members of the College community—past and present. He has left an indelible mark on this institution and his passion and character will forever be weaved into the fabric of Whittier College."

In keeping with Jewish traditions, please note that it is not the convention to send flowers. Bringing food (Kosher) during the days when the family is in mourning is appreciated. The family also welcomes donations to the Fred Bergerson Endowed Scholarship at Whittier College.