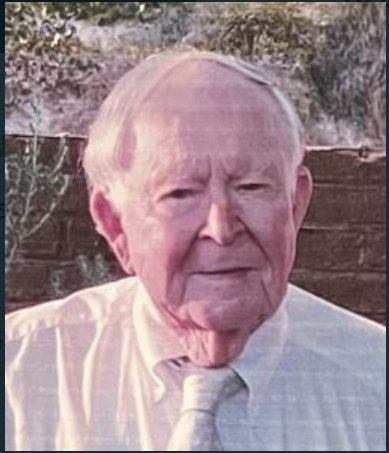 Wood grew up in the City of Whittier and is remembered for his love of the outdoors, he was an avid hiker, aviator, fisherman, and hunter. He attended Whittier High School, graduating in 1941. He enrolled at Stanford University to study mechanical engineering, but his studies were interrupted by World War II. After the attack on Pearl Harbor, Wood enlisted in the Marines and served his country admirably and with distinction as a captain during WW II and the Korean War. After the war, he completed his degree at the University of California, Berkeley.

He would eventually leave his engineering career behind to work with his father in automobile sales. Wood quickly became the president and then owner of Community Pontiac, which would then become Community Honda, in Whittier.

Wood was married to his first wife, Nadine, for over 50 years. They had four children: Janis, Tricia, Don, and Mary. Following her passing, he married Jan (Slater) Lopez and they celebrated 14 happy years together.

Wood “adopted” Whittier College and served as a Trustee for over 30 years, beginning in 1975. He received an honorary doctorate in 1998 and his level of service and giving earned him the title of Poet Laureate. Wood was a tireless and generous supporter of Purple and Gold, Friends of the Shannon Center, Wardman Library, and much more. In addition, in 2004, Bill endowed the Nadine Austin Wood Chair in U.S. History in honor of his late wife and to support the scholarship of excellent professors in that discipline. More recently, he endowed the Jan Lopez Wood Endowed Fellowship in Studio Arts in honor of his wife Jan. This competitive fellowship financially supports the efforts of high-achieving students in the visual arts.

“Whittier College has been truly fortunate that Bill Wood decided to claim us as his honorary alma mater. Bill believed in the mission of Whittier College and devoted his time and energy into ensuring that the College remains successful for generations to come. We are forever grateful for all he has made possible on the Poet campus,” said President Linda Oubre.

Wood was an active member of the Whittier High School Alumni Association and a generous benefactor. He also gave generously to his church, the YMCA, the Boy Scouts, Stanford, UC Berkeley, and PIH Hospital.

A celebration of life will be held on January 21, 2023, at 2 p.m. at Memorial Chapel (located on the Whittier College campus).