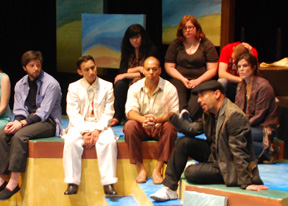 Award winning dramatist Nilo Cruz delivered a special lecture at Whittier College last night marking the inaugural event of the Center for Collaboration with the Arts. During his lecture, the playwright spoke about his experience as a writer and creator of characters. Cruz was also on campus to receive an honorary degree from the College: a doctorate of humane letters (L.H.D.).

Cruz, a young Cuban-American playwright, won the Pulitzer for his play Anna in the Tropics in 2003, becoming the first Latino playwright to receive this award. A year later, the play premiered on Broadway with actor Jimmy Smitts in the lead role.

The Center for Collaborations with the Arts is designed to maximize student learning by advancing the College's deep commitment to interdisciplinary curricula, collaborative teaching, undergraduate research and internships, and the integration of student learning experiences within local, national, and international communities. Undergraduate fellowships are a focal point of Center activities allowing students to participate in student-faculty research and summer internships.

Click here to see a video of the lecture.

On Sunday, Cruz attended the Whittier College theater department's all-student production of his original play Beauty of the Father. During a Q&A session after the play Cruz gave the cast accolades for their performances.

"This play goes beyond realism and is bigger than life, lyrical and poetic. Of all the productions [of Beauty of the Father] that I have seen staged, this is the one that was right on in terms of theatricality," said Cruz.

Cruz is currently writing the book of the new Frank Wildhorn/Jack Murphy musical Havana. The show will have its world premiere at the Pasadena Playhouse in June 2010.