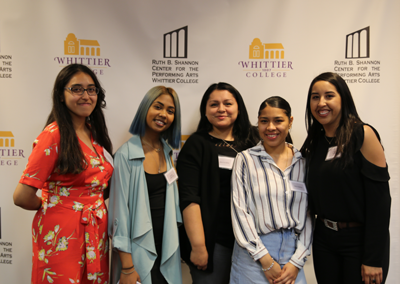 Giving local mothers and grandmothers an opportunity to tell their stories was the goal of VOCES, a digital storytelling series which was recently screened on campus.

VOCES was produced by the Community Education Program Initiative (CEPI), which is an expansion of the College’s long-standing Fifth Dimension program housed in the Department of Child Development and Education.

“The intention of the project was to provide a space for these women to share their stories with the world,” said CEPI program manager Stephanie Carmona ’13, who worked with the women directly on this project. “Their stories talk about childhood memories, experiences, and their thoughts. The project is very special to them because it has allowed them to share and document their stories.”

VOCES features stories shared by 11 mothers and grandmothers from the Whittier community. All of the women showcased in the films participated in an informal computer class offered by CEPI, where they were given access to technology and receive guidance to design their own learning path. Using the resources provided by the program, they had the opportunity to adapt their stories into short films.

“My role for this project has been to guide our CEPI team which is composed of five Whittier students—Joanna León ’21, Shaniya Ramjattan ’22, Oralia Alcorta ’20, Paola Herrera ’22, and Jasmine Perkovic ’19—who facilitate the CEPI computer classes,” said Carmona.

“It was important for me to allow them to really have fun and work alongside the adults and help plan this special project. This has given students the opportunity to build rapport and help create a space where the participants are willing to share their stories.”

Carmona, who earned both an B.A. and M.A. from Whittier College, was one of the original creators of CEPI. Since 2015, she has done extensive community outreach and worked with participants to create meaningful initiatives.
Fifth Dimension and CEPI are BCM Community Education Programs, funded by the BCM Foundation, a local philanthropic organization.