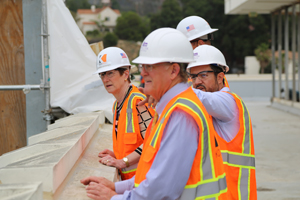 President Sharon Herzberger and Whittier College officials donned hard hats and toured the Science and Learning Center construction site for the first time since the project began. Project Manager John Best gave President Herzberger and the group an update on the project’s progress and confirmed that it remains on schedule.

The design team used this renovation as an opportunity to retrofit the structure and improve its ability to withstand seismic motion. Replacing the exterior’s pre-cast panels with glass will make the Science and Learning Center lighter than its predecessor. Additionally, the building’s internal concrete walls will be wrapped with carbon fiber that will strengthen the structure.