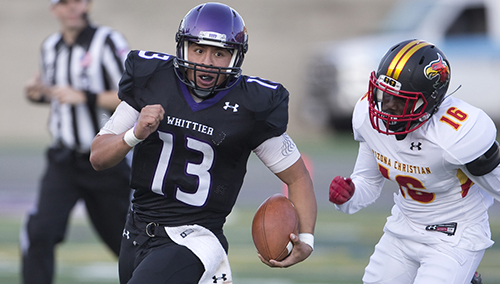 When you ask Miguel Avina ’20 about moments he’s proud of, his first answer is about a teammate. That’s leadership.

The Poet football quarterback, majoring in kinesiology, and his team won their recent game against the Occidental College Tigers. The Whittier College community swelled with pride over the victory, which granted them ownership of the rivalry trophy, “The Shoes.” But reflecting on the huge win, Avina is especially proud not about his own contributions, but for Matthew Valencia ’20, who took over for him after a knee injury sidelined him during the match.

“For him to play in The Shoes game senior year, go out there, lead the team to a win, that’s probably the best moment I’ve had,” Avina said. “I’m proud of that kid and I’m proud of the team overall.”

Pride and belief in your teammates helped secure their victory, and Avina knows that maintaining that confidence—and, just as importantly, communicating it—is key to success. Avina tries to not only set an example, but be vocal in his encouragement, too. He learned that last year from a fellow player, Bryson Sanders ’18. Following that example, Avina came out of his shell and keeps his players pumped up, both in practice and during their games.

“He’s an outstanding young man,” said Head Coach Mike Neale, adding that he’s demonstrated great leadership to the team and exudes every characteristic that the program wants to drive home.

The coach added that Avina is “the complete student-athlete,” as dedicated on the field as he is in the classroom.

Avina’s been thrilled to get hands-on in the Science & Learning Center (SLC) laboratories, including the Yao Yuen Sze Movement Lab. He wants to become a professional trainer for both children and adults after he graduates, and the biomechanics, anatomy, and exercise physiology courses he’s taken thus far have deepened his understanding of the human body, sparked his curiosity about his own on-field performance, and prepared him for his career.

“I just love the kinesiology department. I felt at home,” he said.

Avina fell in love with training after a high school job at a gym in his hometown of Indio, Calif. The idea of helping people, and staying connected to sports throughout his life, excites him.