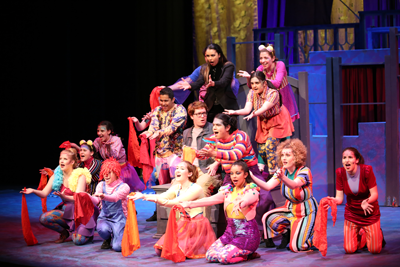 A mystical, musical performance of Pippin is coming soon to the Ruth B. Shannon Center for the Performing Arts.

Pippin follows a young man in his desperate quest to be extraordinary, and to achieve total self-fulfillment. Hypnotized and manipulated by a dazzling group of players, Pippin fights many battles and makes many realizations about himself along his fantastical journey—until, in a climactic moment, he is forced to decide between the magnificent, magical world he has always imagined, and an ordinary, authentic life.

Pippin is unique among Whittier’s theatre productions. Beyond the usual student-comprised cast, led by a theatre professor, Pippin also features students in key leadership roles. Sydney Summers ’19, the show’s vocal director, and Athena Zecha ’19, the show’s choreographer and dance director, are uniquely contributing their expertise to the creation of the musical. Their work in the rehearsal process is on par with that of the head director, theatre professor Jennifer Holmes. In the rehearsal room, they’re given hands-on opportunities to lead their peers while completing requirements for their senior projects.

Summers, who is a double-major in theatre and music, has been preparing for her senior project for two years. Holmes pitched the idea to Summers after working with her on the Whittier’s 2017 production of the musical Next to Normal, asking her if she would be interested in music-directing a future show.

Summers has no shortage of experience in the field. She has been studying voice for 10 years, and has experience teaching and directing children at musical theatre summer camps and coaching adults in private vocal lessons. Relatively confident in her abilities, she agreed to Holmes’ proposal, and spent the next two years brushing up on her piano skills in preparation for this year’s musical, which she and Holmes chose together.

Now, less than a week away from opening night, Summers is glad that she chose to take on this ambitious project.

“It’s been an amazing experience so far! I love working with kids, but it’s such a different product working with young adults. It’s been musically more involved for me, to be able to hear really complex chords and six-part harmonies; to be able to work so intensely with dynamics and emotional content of the song,” said Summers. “Overall, it has so much more depth to it than anything I’ve ever worked on before.”

Summers’ main goal after graduation is to perform. But, she also plans to continue exploring the teaching field and other artistic pursuits. Besides her vocal instruction at local churches, Summers also works on costumes at the nearby amusement park, Knott’s Berry Farm.

Summers feels that Whittier has uniquely prepared her to pursue her dreams.

“The number-one thing that Whittier has taught me is independence. Being able to feel secure on my own, in my own ability, because of the support system that we have here,” she said. “Whether it be the professors, the counselors, the women and men who work in the Campus Inn or The Spot. Always being able to go out and see a friendly face, and know that they are supporting you every step of the way.”

Zecha, another theatre major with a minor in Chinese, has worked with Holmes to choreograph and teach the cast of Pippin a dozen original, stylized dance numbers. Zecha has based her senior project on research and exploration of the iconic choreographer Bob Fosse, who directed and choreographed the original Broadway production of Pippin.

“Since starting college as a first-year, I’ve known that I wanted to challenge myself to choreograph and create something as part of my senior project,” Zecha said. “My end goal was to have a performance piece that I could showcase. The idea of choreographing for this year’s musical came as an idea from one of my theatre professors. I saw this as a challenge and a great opportunity to take on.”

Zecha has been part of the Whittier College Dance Team since her first year—and now, she’s the team captain. She has applied the skills she has learned from the team into her work on Pippin—where, in addition to choreographing the show, she is also performing as a featured dancer in the ensemble.

Like her fellow student-director Summers, Zecha is thrilled that Whittier gave her the opportunity to do a hands-on senior project in the art form she loves most.

“I couldn't be more pleased with my decision and I am so proud to be part of an amazing production,” Zecha said.

While Zecha’s plans after graduation are not set in stone, she, too, aims to pursue a career in the performing arts industry.