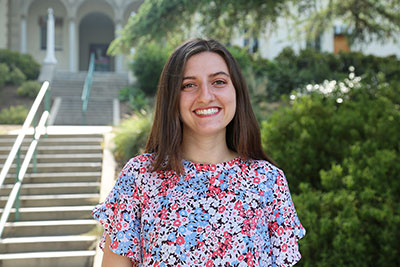 After enjoying a wealth of invaluable experiences at Whittier College, Stella Thermos ’19 is set up for success.

For one, the business administration major completed a prestigious internship with Goldman Sachs this past summer. Spending a rigorous few months in their Salt Lake City, Utah, high-rise office, Thermos learned a lot in the fast-paced environment—and will transfer those skills to a job she’s landed after graduation: analyzing credit for the Comerica Bank in Silicon Valley.

The summer internship wasn’t her only experience with Goldman Sachs: during a short-term study abroad trip to London, Thermos and her classmates visited the finance giant’s office near the River Thames, as well as the London Stock Exchange, as they sharpened their knowledge of the business world—while squeezing in time to see St. Paul’s Cathedral and Winston Churchill’s War Room, too. Thermos also joined a two-week trip to Germany, where her class learned first-hand how large businesses like BMW and Volkswagen are taking strides to become more sustainable manufacturers.

Thermos not only feels prepared thanks to her academics, but from the experience she gained helping her fellow students at the Center for Achievement and Academic Success (CAAS), as well. She spent three years working at CAAS, two as an intern, during which she developed valuable interpersonal and soft skills.

“Additionally, the Career Center was very helpful in helping me put together my resume and in preparing for the interview process,” Thermos said. “I truly believe that Whittier’s large amount of resources have helped me prepare for this big step in my career.”

Thermos also leaves Whittier with a huge win to feel proud of: she was a member of a championship soccer team. In 2017, the women’s team took home the Southern California Intercollegiate Athletic Conference trophy.

“I feel thankful to have been on a team with such amazing women and with great coaches,” Thermos said. “They’ve pushed me to be my best in both the classroom and on the field while mentally supporting me in all that I’ve done.”