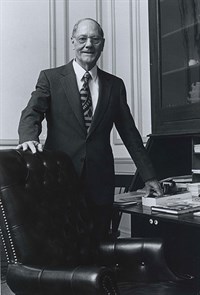 Whittier College President Emeritus Eugene S. Mills LL.D., L.H.D. passed away on Tuesday morning at the age of 95. He was president of the College from 1979-1989 and had previously taught in the psychology department for 10 years.

Shortly after Mills assumed the presidency, the Whittier Scholars Program and the Liberal Education Program were implemented, leading to national attention for the College. The Mills years also brought about changes in the shape of the campus. The construction of the Ruth B. Center for the Performing Arts and Harris Residence Hall and the renovation of Platner Hall improved the College functionally as well as aesthetically. Mills presided over the College's first capital campaign, which raised $25 million over a five-year span, and increased alumni support by 21 percent.

Mills had a long career in academia. He attended Earlham College and Claremont Graduate University, earning a Ph.D. in psychology at the latter. He taught psychology at Whittier for 10 years before joining the faculty at the University of New Hampshire, where over the next 17 years he served in various leadership positions, eventually as president from 1974-1980. Mills also served as interim president of Earlham College from 1996 to 1997.

His wife Dorothy (Dotty) Wildman Mills passed away earlier this year. He is survived by son, David and daughter, Sara and grandchildren.