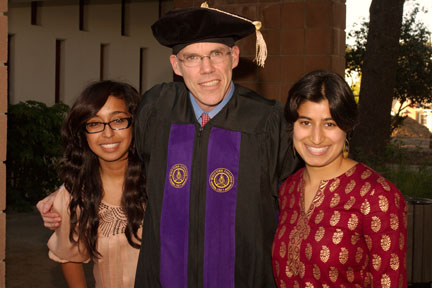 Author, educator, and leading environmentalist Bill McKibben spoke at Whittier College as part of the 2010 New Student Convocation. He also received an honorary degree from the College: a doctorate of humane letters. His lecture, Science and Society: Making Sense of the Most Important Number in the World, dealt with the current issue climate change and provided examples of grassroots efforts designed to alleviate the problem.

Viewed by many as the world's most influential environmentalist, McKibben is leading the largest global grass roots campaign to stop climate change.

In addition to his afternoon lecture, McKibben spoke with about 150 first year students to discuss his writing process. At lunch time he met three dozen students for a workshop on environmental activism.

This visit is the culmination of the 2010 New Student Orientation, Poets Go Green, which is designed to promote an eco-friendly consciousness on the campus community.

Clikc here to watch a video of McKibeen's lecture.