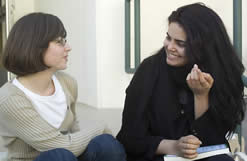 Alanoud Al-Sharekh, visiting Fulbright scholar and specialist in Middle Eastern feminist literature, hopes that through open dialogue and the sharing of her own experiences living in the region, she can help dispel some of the myths and hype that the Western media has fed to the American public.

lanoud Al-Sharekh, visiting Fulbright scholar and specialist in Middle Eastern feminist literature, has joined the Whittier College faculty this spring, teaching classes on topics such as gender politics and Islam for the Department of Religious Studies.

Her hope is that through open dialogue and the sharing of her own experiences living in the region, she can help dispel some of the myths and hype that the Western media has fed to the American public.

"I think more so than any other faith, the media has been marketing women in Islam as an oppressed group — some of the symbolism, like choosing to wear the veil, has been distorted through that," she says. "If I can contribute to a better understanding in the subtleties involved in such a comparison, I think I will have achieved my job."

For example, she notes that young women who these days choose to wear a veil or "chador" do so more for reasons of fashion, rather than anything else. "In the past 20 years, the head cover has become more popular among young people, as a symbol of piety and a fashion statement."

And, while the media may report on events in the region, Al-Sharekh cautions that the coverage is often less than comprehensive.

"There are unfortunate things that happen, but it's the Jerry Springer tip being shown."

While Al-Sharekh is open to sharing and explaining her culture and religion, she regrets having to defend it. She explains that what happens in the Middle East, especially as it relates to women, is not just about Islam, but involves complex and diverse sets of social, historical, and political factors.

"There is no homogeneity in Islam," she says. "And the concerns of the West are not the concerns of other world citizens. Here you have the culture of individualism — finding your niche. When you move to the East, the concern is much more with community, with society, with the group. Your value as an individual is in how you contribute to the group."

In addition to teaching, Al-Sharekh will serve as a guest lecturer in classes from cross-disciplines, and as a participant in a number of campus events related to her scholarship and interests.

"By having Dr. Al-Sharekh on campus, a woman from that region, with our students, faculty, and community, it will facilitate an exchange of ideas and foster understanding," says Joyce Kaufman, professor of political science and one of the chief coordinators for the scholar's visit.

Head of the humanities department at Arab Open University in Kuwait, Al-Sharekh holds a degree in comparative feminism and literature from the School of Oriental and African Studies, London University. She is the author of Angry Words Softly Spoken: A Comparative Study of English and Arabic Women Writers.

Al-Sharekh has also been working with NGOs in Kuwait, and her recent efforts supported the Kuwaiti parliament's vote to give women full political rights. The amendment means women can—for the first time—vote and stand in parliamentary and local elections.