Following a Family Tradition of Military Service and Support 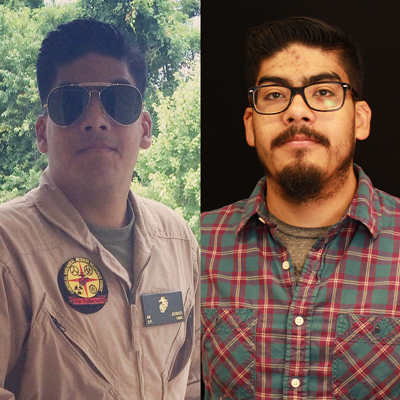 “Enlisting in the military allowed me to play a part in ensuring the safety of my fellow marines and the freedoms Americans enjoy every day,” said Aaron Mendoza ’20, a United States Marine Corps veteran.

“It was also my way of saying thank you to all those that came before, during, and after me.”

In the Marine Corps, Mendoza achieved the rank of corporal as a chemical, biological, radiological, and nuclear (CBRN) defense specialist. He originally intended to enlist as a musician, but would have had to wait too long for a spot to open up. Instead, his love for science led him to mission occupational safety, training marines on how to complete their mission in any CBRN environment, including use of equipment and decontamination of CBRN hazards like corrosive acids and flammable chemicals.

At Whittier, Mendoza studied physics and was deeply involved in supporting the Veteran Resource Center (VRC) throughout his three years on campus. He, along with a few other veterans, was able to maintain the center and advocate for all student veterans and dependents using Veterans Affairs benefits.

“We made sure that no veteran was left behind, that each of them was set up for success,” said Mendoza. “We helped guide, tutor, and support our veterans, and we even started a small library of textbooks and materials that incoming veteran students could use.”

The library, which began with five to six textbooks on its shelves, is currently stocked with more than 50 books that can be borrowed or added to.

In addition to graduating, Mendoza is proud of the work he’s done to motivate his fellow veterans and to leave the VRC in a strong position to help future student veterans succeed at Whittier. “For my next step, I’d like to obtain a decent job to support my family, but I also want to continue supporting my community and its veterans as best as I can.”

Following a Family Tradition of Military Service and Support