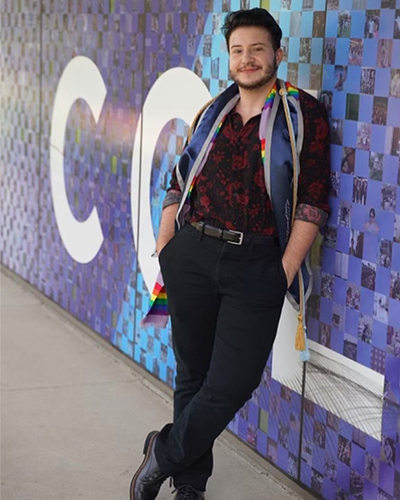 Although initially focusing on engineering, DiGrazia decided to major instead in anthropology—a field that shaped his understanding of the world. After delving into empathetic and insightful studies, and getting immersed in campus life, DiGrazia has his eyes set on a professional future supporting college students in their own higher education journeys.

On Campus Involvement/Activities: I was President of TANGLAD for three years, was an actor in four school plays, worked in the Office of Equity and Inclusion as a Diversity Ambassador for three years and as the Gender Inclusive Housing Resident Advisor for one year.

Experiential Activities: I had a *very* small role in an TV show that will be coming out in the future, and I have worked as a production assistant for two Marvel films/shows.

Most unusual thing you did at Whittier College: Out of the four plays I did at Whittier had something to do with people getting hanged in at least one point of the play and that always seemed like a weird thing to me.

Looking back at your time at Whittier, which accomplishment are you most proud of? I am probably most proud of my senior thesis project where I did research on the experiences of trans and gender nonconforming students in college and university housing.

Favorite class you have taken: Sex and Gender in Anthropology

What was the most challenging class you have taken at Whittier? Differential Equations

What is the best thing about being in your specific major? The anthropology department has definitely helped shape the way I understand the world and move away from an ethnocentric view of life. I think learning about anthropology increases empathy and gives a greater understanding of human beings both as individuals and as a product of environment and culture.

Advice you would give your first year self: To not hold on so tightly to the person I thought I had to be. I wish I had decided to take all the fun, interesting classes I wanted to earlier on, instead of trying to commit myself to an engineering major before I even knew if I liked it or not. I held on to a lot of things longer than I should have because I was even more scared of the unknown than the thing I already knew but didn't like. Who knew the unknown would be the really fun part of life?

What are your plans after graduating? I plan to take a gap year to pursue acting for a bit and take a break from school and then pursue my masters degree in higher education student affairs.

What are your ultimate career goals? Ultimately I want to work in student affairs in any department or capacity where I can support student success, particularly students from historically marginalized communities.