Rallying to Help the Homeless

Rallying to Help the Homeless 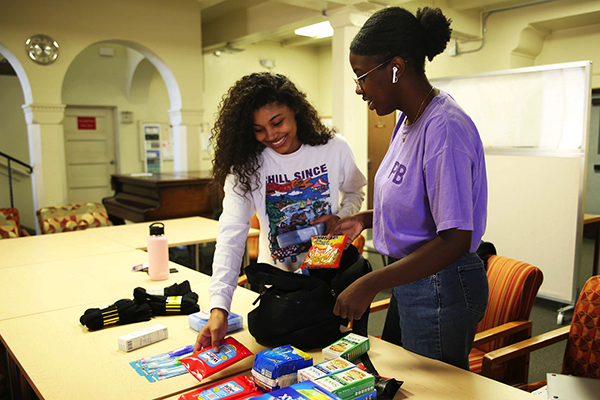 The club is collecting hygiene products, non-perishable food, and other necessities to hand out in backpacks to those in need. Among the items being requested are body wash, body wipes, socks, deodorant, toothbrushes, toothpaste, feminine products, batteries, flashlights, disposable ponchos, mini first-aid kits, mini umbrellas, and non-perishable foods. Donations can be dropped off in the lobby of Wardman Hall.

Journee Bradford ’21, the club’s president, was motivated to launch the drive after meeting one-on-one with members of the city's homeless population earlier this year. Bradford, who's working on a self-designed major in business and entertainment, joined her friend on a film class project that set out to document stories from homeless people. As they described the downturns in their lives and the challenges of surviving on the street, Bradford was moved to do something to help.

In that moment, all she could offer them was a meal from McDonald’s. She and her friend took down their orders and made deliveries that day. Their plight remained on Bradford’s heart, and the idea of doing more developed into the drive.

“I’m from Louisiana, so at home, every holiday I volunteer with my mom. We go to the soup kitchens and hand out meals and plates and stuff. I haven’t done it as much now that I’ve been in college, but I feel like this is a way for me to start to do that,” she said. “I definitely think this is the perfect way for everyone, including myself, to give back together as a community because we’re all part of the same community.”

Their goal is to fill 150 backpacks with items that will help meet a homeless person’s basic hygiene and comfort needs. The drive continues until November 25, after which the Black Student Association will shift gears to collect gently used or never-worn clothing. Shoes are also acceptable, so long as they’re still wearable. Many of the people Bradford met only have two outfits and try to make them last as best they can.

Their plan is to collect the clothes until finals week and deliver the donations to a local organization, such as a shelter.

During her conversations with homeless individuals, Bradford learned just how far a simple act of generosity or kindness can carry someone through their day. "They would think about that kindness for a week or a month straight," she said. “Or just to give them something, they’ll never forget your face and forget that that happened.”

For questions or more information about the backpack or clothing drive, contact the Black Student Association through their Instagram (@bsawc) or Twitter (@bsawc1), or email Bradford at jbradfor@poets.whittier.edu.