A Poet’s Act of Heroism

A Poet’s Act of Heroism 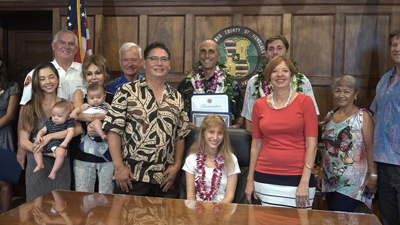 A day of surfing along the scenic waters of Honolulu turned into a life-changing moment for Sean Parsa ’02, who rescued 18-year-old Kalei Kolivas from drowning.

While out in the water, Parsa and his friend Jesse Yonover noticed someone a short distance away waving for help. The surfers sprang into action and headed over to help Kolivas, who had hit her head on the reef and lost consciousness.

Acting quickly, Parsa placed Kolivas on his surfboard and began administering CPR while Yonover held the board in place.

"I didn't want to give up, but I felt like nothing was happening. Then a third time just all this foam came out of her mouth and nose and then she slightly started breathing,” said Parsa in an online article posted by the local ABC affiliate KITV.

KITV shared Parsa and Yanover’s story along with the story of four other good Samaritans who rescued another swimmer on the same location the very next day. All six were recognized by the Mayor of Honolulu during a special ceremony where Kolivas had the opportunity meet Parsa and Yanover to thank them for saving her life.