Latina political leader Gloria Molina will give the keynote address at Whittier College's 13th Annual Latino Graduates Celebration, May 10 at 4 p.m. in the Ruth 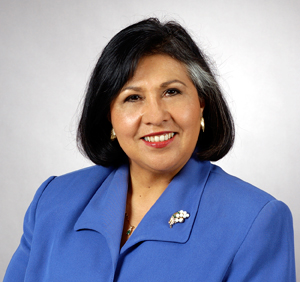 B. Shannon Center for the Performing Arts, 6760 Painter Ave., Whittier, CA 90608. Molina will also be formally recognized as a Whittier Poet upon receiving an honorary degree from the Whittier College faculty: a doctorate of humane letters (L.H.D.). During the event, approximately 80 graduate and undergraduate students will don the traditional cap-and-gown and be formally recognized by President  Sharon Herzberger.

“Whittier College is an example of what other colleges and universities in California—and the nation—should be aspiring to,” said Supervisor Molina. “Not only is Whittier College matriculating a record number of Latino students, but the faculty, staff, and administration are making sure that these young people achieve their academic goals, graduate, and become successful professionals.”

Latino students currently comprise more than 30% of the total student body at Whittier —making it a Hispanic Serving Institution — and constitute the largest minority group on campus. The most recent data shows the national 6-year graduation rate for Hispanic students at 47.2%; at Whittier, the rate is 72%—among the highest in the nation.

Campus leader and graduating senior Rebecca Raya will be one of the student speakers at the ceremony.

Raya, a business administration major, is applying to join the Peace Corp and plans to earn an MBA with the ultimate goal of becoming a diplomat.

“I am the first in my family to go to college. Attending Whittier gave me opportunities my parents never had, like studying abroad not once, but twice. It’s amazing that I’ve accomplished my life-long goal of earning a B.A., I know that will open so many doors for me.”

Raya’s younger brother Ruben will be a freshman at Whittier next fall.

“This is an exciting time for me and my family. As I mark the end of my time at Whittier, he is beginning his own journey.”

Luz Maria Galbreath, director of the Ortiz Programs is one of the main organizers of this yearly event. “This is a very special event that allows Latino families to celebrate the accomplishments of their students in a bilingual setting.”

The Latino Graduates Celebration is part of Whittier College's Commencement Week activities and is organized by the Ortiz Programs, MEChA, Amigos Unidos, and the Cultural Center.

In 1991, Gloria Molina became the first Latina ever elected to the Los Angeles County Board of Supervisors. To many observers, Molina’s accomplishment represented both the growing formidability of the Latino electorate and the determination of voters of all backgrounds to elect a leader to office who understood their needs. Her tenure as county supervisor has produced dramatic results both because she has insisted county services be streamlined for maximum effectiveness and because she has brought to fruition major capital endeavors that improve Los Angeles County residents’ quality-of-life—particularly Molina’s First District constituents. Molina first entered the political arena as chief deputy for California State Assemblyman Art Torres and later for the renowned California State Assembly Speaker Willie Brown. Afterward, she served in the Carter White House. Molina was elected to the California State Assembly in 1982 and the Los Angeles City Council in 1987.  Both times, she was the first Latina to earn this honor. Named as one of the Democratic Party’s “10 Rising Stars” by Time magazine in 1996, Molina served as one of four vice chairs of the Democratic National Committee from 1996 through 2004.

The Ortiz Programs were named in honor of Martin Ortiz ‘48, one of the first Latinos to graduate from Whittier College and founding director of the former Center of Mexican American Affairs. The mission of the Ortiz Programs is to support Latino students in their academic pursuits and leadership development through workshops and programs offered in collaboration with other departments on campus. In addition, the Ortiz Programs sponsor annual events and co-curricular activities that seek to increase awareness and appreciation of Latino culture and history while creating a close-knit community among students, parents, alumni, staff, and faculty.