Get to know the global economy with a trip overseas or put your economics lessons to the test in a real-world setting.

Both opportunities are possible as a Whittier College student. Read about these economics majors who used such experiences to prepare themselves for success after graduation. 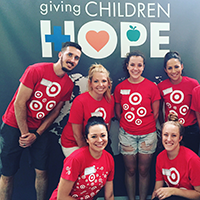 Susan Rosett knows how to use data to test theory in a real-world environment, thanks to an internship with Target.

Interning for major retailer as executive team leader, the economics major evaluated demand in real time, using sales reports to analyze what was selling, to make data-driven decisions and drive success at the store. The internship also sharpened her communication and leadership skills.

The experience was such a positive one, she returned for a second year. After graduation, Susan hopes to begin a career at a financial group.

To learn more about internships and other professional opportunities, contact the Weingart Center for Career and Professional Development.

Nicholas Hanashiro is fascinated by the direction countries take. With a keen interest in international economics, Nicholas explored that passion during a semester abroad at a university near Tokyo, Japan.

In a suburb near Tokyo, and during his many adventures around the country, Nicholas experienced first-hand how the world power’s economy is shifting toward a stronger emphasis on tourism. He’s interested to know whether South Korea follows a similar trajectory in the next 20 years.

For the more immediate future, Nicholas—who was already bilingual in English and Spanish—has broadened his language skills into Japanese and gained amazing experiences to help him toward his goal of working for a multinational company.

Whittier College increases access for students to study abroad with the Global Poet Scholarship, which awards $2,000 to every student who studies abroad through the College's Office of International Programs.