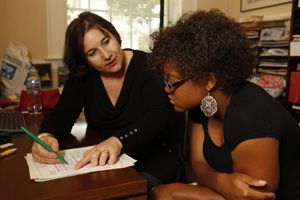 Professor of Modern Languages and Literatures Marie-Magdeleine Chirol has been named the new Hazel Cooper Jordan Chair in Arts and Humanities. This appointment recognizes Chirol’s outstanding accomplishments in teaching and scholarship, and it is intended to support future scholarly growth.

Chirol is an accomplished scholar of French and African Francophone film and literature. She has written three books, the most recent on Francophone African Cinema with a focus on filmmaker Gaston Kaboré from Burkina Faso. Chirol’s two other books are on the motif of ruins in 20th-century French literature and imaginary ruins in Marcel Proust’s Remembrance of Things Past.

“With these honors and her recently published book, Gaston Kaboré, Conteur et visionnaire du cinéma africain, this recognition is most apt,” said President Sharon Herzberger in an email to the campus community announcing the appointment.

The Hazel Cooper Jordan Chair in Arts and Humanities was established in 2007 with a gift from Dr. Chester “Chet” McCloskey ‘40, and his wife, Olive (Jordan) McCloskey ‘44, in memory of Olive’s mother, an alumna in the Class of 1912. Its purpose is to maintain and enhance Whittier College’s contribution to the languages and the humanities.