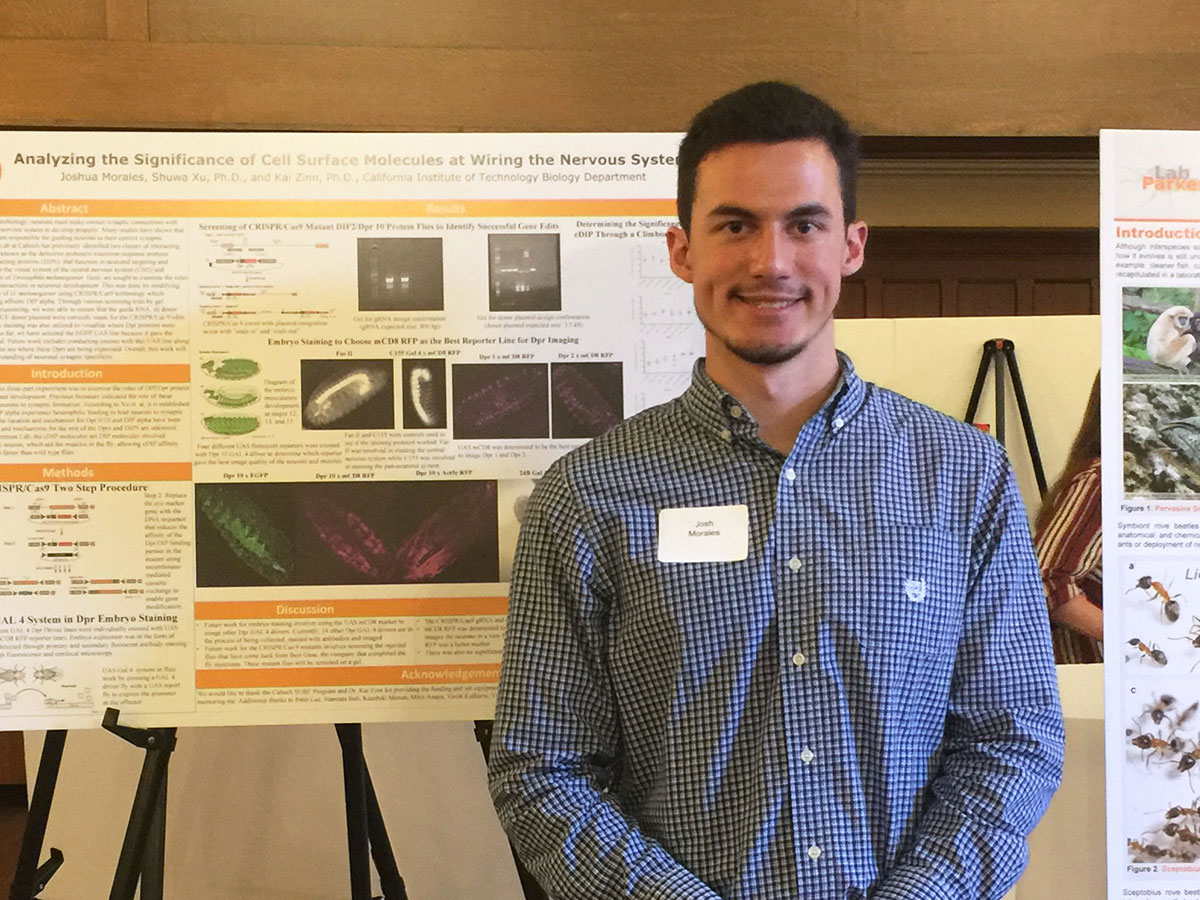 Equipped with a wealth of biology lab experience, Joshua Morales ’20 researched how the brain connects its synapses, paving the way for better treatment for diseases like Alzheimer’s.

Morales, who designed his own neurobiology major through the Whittier Scholars Program, earned a coveted summer internship at the California Institute of Technology (Caltech). He studied how proteins in the brain work, including using flies as miniature models for studying neurons and how they develop.

“The work we did is very important because we are closer to understanding the mechanisms behind how the neurons in the brain are able to form connections during development,” Morales said. Further research can shed more light on early onset developmental diseases, and help find a way to reconnect neurons in diseases such as Alzheimer's.

To lay a foundation for that work, Morales and his mentor edited flies’ genomes to see what effect turning off specific proteins would have on their brain development. He also took telling snapshots of neurons in fly embryos that had specific proteins attached to their genes.

Examining the genetic make-up of flies—particularly the unborn ones—is no easy task. It requires a strong attention to detail, on top of the important laboratory skills required for advanced work like editing genes and cloning molecules to test out theories. But Morales was well prepared.

“My experiences at Whittier played a crucial role in being able to succeed in my research at Caltech,” Morales said. “I don't even know where to begin but there were so many skills I learned at Whittier that helped me succeed.”

His preparation for success began on day one, when he walked into his first-year writing seminar, Biology of Aging. The course introduced students to real, hands-on research, and how to clearly and effectively relate their findings. During his project with Professor Hector Valenzuela, Morales also learned how to tell male and female fruit flies from one another—which is as hard as it sounds, but an important step before investigating finer details like their biological building blocks.

The experience paid off. When Morales arrived at his neurobiology internship, his mentor asked him to demonstrate how to tell the flies apart by sex. Morales didn’t make a single mistake.

“She was really impressed,” he said. “And on top of that, she said that I did about five times faster than all her previous summer students.”

The summer internship wasn’t his first foray into real research, either. Through his Biology of Aging course, he and other students applied for—and won—mini-grants from the National Science Foundation to conduct personally crafted research projects. As only a rising sophomore, Morales studied the effectiveness of a new treatment for leukemia. With Valenzuela as his mentor, Morales learned a lot of new laboratory techniques for studying cells and molecules that, he said, he otherwise wouldn’t have been able to learn elsewhere.

Morales even found that much of his lab work in his upper-division Molecular Genetics course had equipped him well for the molecular cloning techniques he needed to perform at Caltech.

Now that he’s back on campus, he’s looking forward bringing his experience with editing genes in neurons to his senior project. It’s still in the planning stages, but he hopes to find an application for preventing disease.

Neurons fascinate Morales. With so much to discover about the tiny cells that make up the nervous system, he’s curious to find out more.

“Neurobiology is very interesting to me because the neuron in the only cell in our body that allows us to make decisions, have thoughts, come up with innovative ideas,” Morales said.

With the experience he’s had so far, he’s ready to explore that question deeper.