Whittier College's response to COVID-19 and plans for Fall 2020

The Lasting Legacy of Martin Ortiz '48

The Lasting Legacy of Martin Ortiz '48 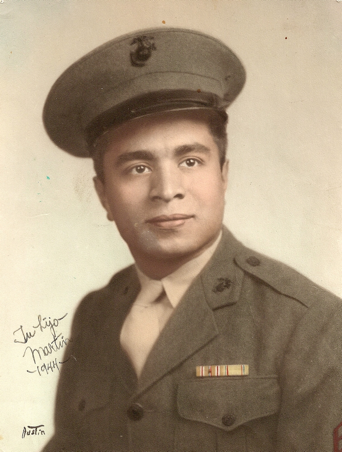 Martin Ortiz’s '48 dedication to the betterment of students’ lives and education excellence left a permanent mark on Whittier College.

November 11 marks 100 years since Ortiz’s birth, and the Whittier community is marking the occasion with a celebration of his life and legacy.

Born in Wichita, Kansas, Ortiz attended Whittier College on the GI Bill after serving in World War II. He went on to earn a master’s degree in sociology at George Williams College in Chicago. He returned to Whittier in 1958 to work as an instructor and administrator, where he made a historic shift toward the inclusion and empowerment of Latinx students.

He reached out to local schools and worked with Latinx families to help students enroll at Whittier—often, as the first in their families to pursue a college degree.  Once they arrived on campus, they weren’t left on their own. Ortiz founded the Center for Mexican American Affairs, a precursor to today’s Office of Equity and Inclusion, to provide students with guidance and resources, including scholarships he raised money for.

Through the Center, he led successful retention and recruitment efforts for Latinx students. He continued to work with their families, understanding that they were part of their students’ college experience; he reached out to and stayed connected with alumni; and he hosted on-campus events such as Tardeada, an annual celebration of Latinx culture that recently celebrated its 48th year during Poet Homecoming.

Between 1968, when the Center was founded, and 1979, Latinx student enrollment tripled at the College.

Affectionally known as “El Jefe” (the boss), Ortiz served Whittier for more than 40 years. In 2004, he received an honorary doctorate from Whittier College and the title of director emeritus of the Center of Mexican American Affairs—now known as the Ortiz Programs in his honor. He also helped establish Alianza de Los Amigos, an alumni association for Latinx graduates.

Although Ortiz died in 2009, his impact still resonates on campus.

Programs like the Ortiz Fellowship create a ripple effect, touching more lives as the students conduct significant work in their communities. Ivelis Colòn ’19, one of last year’s recipients, discovered how religion affects incarcerated LGBTQ women, and in doing so helped give a voice to the voiceless.

During the recent Martin Ortiz 100 Campaign, a successful fundraising effort to continue his transformative work with Latinx students and families, alumni shared their fond memories of “El Jefe.”

Perla Trumkul ’96 remembers meeting him at his office and feeling understood as a first-generation college student.

“He knew that my mom and dad were part of my college experience, and that was very special, because no one else understood that,” said Trumkul, who’s now district chief of staff for U.S. Congresswoman Grace F. Napolitano, and working on her doctorate. “He was our father. He was our mentor. He was my parents’ best friend. We will always love him and always treasure the moments we had together.”

Ortiz had a huge influence on the life of Miguel Santana ’91, as well, who’s now the president and CEO of Fairplex and a Whittier trustee. Before that, Santana was the city administrative officer for Los Angeles. Santana spoke about the influence that Ortiz’s support, guidance, and wisdom had on his life.

“He was patient. He was kind. He was thoughtful,” Santana said. “The thing about him that I’ll never forget is that he saw my future before I could see it. He saw the promise in me. He knew that I would one day be able to make my own contributions to community, and so he supported me in ways that I will always be grateful.”

Jose Casillas ’87, now an account manager at HUB International, remembers Ortiz made him believe—in his calm and reassuring way—that a first-generation son of immigrants could graduate college, and encouraged him not to do it alone.

“I cannot have done it and I could not be here today without the help of someone like Martin Ortiz,” Casillas said. “As Mr. Ortiz always said, if you’re willing to help someone, you can make all the difference in the world. Mr. Ortiz made a tremendous difference in my life.”

The Ortiz Centennial Celebration on November 11 begins at 6:30 p.m. at the Ortiz Fire Pit, located behind Dezember Alumni House.