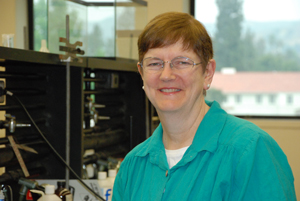 Professor Emerita Priscilla Bell was a Research Chemist at Ashland Chemical for two years before beginning her teaching career at The Ohio State University. After two years at that large state university, Bell came to Whittier College where she joined the chemistry department as the Inorganic chemist.

During her tenure at Whittier, Bell taught general, analytical and inorganic chemistry along with courses designed for more general audiences ("Physical Science for Teachers," "Medicine and Culture," "College Writing Seminar").

Over the years, Bell has been active with the preparation of students as chemists and preparing them for health science graduate schools. In the latter area, she served as the Co-Chair of the Health Science Advisory Council and developed the Whittier College Health Professional Shadowing program.

Bell's research interests shifted from classical organometallic chemistry to cultural influences in medicine and finally to the chemical composition and action of herbs. Most recently, her research group studied the action of alcoholic herbal extracts on the growth of bacteria and fungi. Her research group presented their preliminary results at the Spring 2012 national meeting of the American Chemical Society as well as the national meeting of Experimental Biology in 2014.