Chemistry students help make discoveries that could change the world.

To find fellowships that match your interests in chemistry, visit the fellowships website. 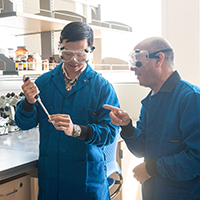 Putting a Stop to Cancer

There’s a certain family of enzymes prevalent in a number of human tissue types where common cancers occur, such as skin, colon, and breast cancers. Ryan Nakamura is helping shed light on how to stop them.

Alongside professor Devin Iimoto, Ryan and his fellow student researchers are testing the power of a potential inhibitor of these enzymes. The early signs are promising and exciting.

“This would be a new, innovative approach in treating certain types of cancers. Instead of targeting existing cancerous cells, this research would look into targeting the enzymes responsible for converting healthy cells to cancerous ones,” Ryan said. 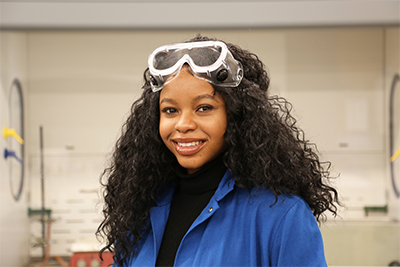 Olive Anagu came up with an idea for making dairy more appetizing for the millions affected by lactose intolerance.

To help counteract the intolerance, dairy milk is normally treated with lactase, an enzyme that breaks down lactose. The issue with this method, Olive said, “is that it leads to the introduction of more preservatives and chemicals that need to be in the milk,” which some consumers would rather avoid.

"This was an issue very personal to me, as I love ice cream and milk, and I believed I could cause a change with a little application of my biochemical background,” Olive said.

She may have a solution, and it involves beads. She ran the mixture through a column of specialized silica beads to remove lactose from milk. She was the very first to do it, professor Ralph Isovitsch pointed out about Olive's novel research.

After testing her theory in the Science & Learning Center’s organic chemistry lab, Olive found that the column process was working, immobilizing 99 percent of the lactose on the column and breaking down 60 to 70 percent of the lactose in the filtered milk. There was a hiccup: straight out of the carton, milk is too thick to run through the column, so she had to filter it first, which removed a large amount of the beneficial fats and proteins that make milk “the wonder food” that it is, Olive said.

Though the need for filtration disappointed Olive, she’s excited about how effective the column was at removing lactose and has ideas about how she might be able to modify the process so that milk can pass through with ease. 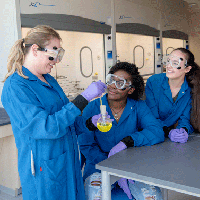 Stephanie Jackson didn’t have to wait to get involved in research. During her first semester at Whittier, professor Priscilla Bell reached out to see if she was interested in joining her team.

Before long, Stephanie was helping Bell examine the antibacterial properties of herbs, alongside fellow students. Recently, she joined a fellow chemistry major, Camryn Purdom, on professor Christina Bauer's newest research project: nanomaterials and their ability to organize molecules in different shapes and environments. It’s hoped that this work will lead to the creation of more economically viable fuel cells.

Along the way, Stephanie honed her critical thinking, leadership, and teamwork skills, as well as her precision in handling laboratory equipment. She and Camryn also put into practice what they learned in their courses, and learned by teaching, thanks to an opportunity to explain each step of the process to a younger research team member from a local high school.

“In addition to my laboratory growth, I have also gained friends with similar interests, whom support my goals and have given me advice throughout my years at Whittier College,” Stephanie said.