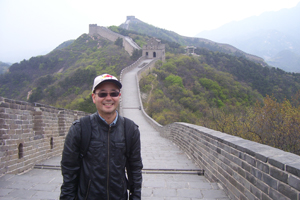 Iimoto regularly conducts collaborative student-faculty research. Notably, in 2004, he presented collaborative work at the American Chemical Society meeting in Anaheim on using a fibrinolytic enzyme from the Florida Cottonmouth Snake to remove blood stains from clothes. Most recently he presented with Joshua Smith '11, "Quantifying fibrolase using a widely available technique: Polyacrylamide Gel Electrophoresis," at the ACS meeting in San Francisco.

Iimoto attended Carleton College in Minnesota where he had the opportunity to learn from some of the finest faculty in the country about literature and history, but most importantly about chemistry and biology, which involved solving puzzle-like problems, synthesizing compounds in the laboratory, and learning that to understand living systems and diseases of those systems, one would need to explore the compounds of life.

He continued his education in graduate school at UC San Diego in the field of biochemistry. Afterwards, he took a postdoctoral position in Dr. Tsunao Saitoh's laboratory in the Department of Neuroscience analyzing compounds found in the brains of people with Alzheimer's Disease.

Grants Funded to Support this Research

Students in Professor Devin Iimoto’s laboratory are currently working on two major projects: the purification and characterization of fibrinolytic enzymes from snake venom that may treat heart attacks and strokes and/or remove blood stains from clothes, and in collaboration with Professor Ralph Isovitsch, testing various stilbenes and other compounds for their potential to prevent cancer.

It is known that many different snake venoms contain enzymes and other proteins that can affect blood clotting by acting as either an anti-coagulant (prevents blood clotting) or as a fibrinolytic agent (dissolves blood clots). The Florida Cottonmouth Snake ( Agkistrodon piscivorus conanti ) is one such snake whose venom contains an enzyme, apcfib, which is capable of hydrolyzing fibrin, the protein which holds the platelets together in the blood clot. The enzyme has not been studied much and so Iimoto’s laboratory is interested in isolating and studying this enzyme for its biochemical properties (structure and function) as well as its potential to treat heart attacks and strokes by dissolving unwanted blood clots and for removing blood stains from clothes.

Current research is focused on two areas. First, the enzyme must be purified to study its biochemical properties and to test its effectiveness in dissolving blood clots in vivo. So far the fibrinolytic enzyme is about 90% pure based upon SDS gel electrophoresis after passing the crude venom over a hydrophobic interaction column and then the active fractions over a hydroxyapatite column twice under two different conditions.   Iimoto’s next step is to test a different column such as a gel filtration column to finish the purification.

The second project is using the partially purified enzyme to determine how effective it is at removing blood stains from clothes. Because the enzyme breaks down fibrin, Iimoto and his students hypothesized that the enzyme could help loosen the blood on the clothes before washing. Preliminary results indicate that the enzyme plus detergent is about 15-20% more effective at removing the blood stains than the detergent alone.  In order to more accurately quantify the amount of blood removed with different quantities of enzyme, they need to develop a reliable assay to determine the enzyme activity.

While there are many different causes of cancer, one cause arises from our body’s ability to convert polyaromatic hydrocarbons found in our diet to even more carcinogenic compounds by an enzyme known as Cytochrome P450 1A1 and 1B1.  Previous studies have shown that resveratrol, a compound present in red wine, and other stilbenes may lower the incidence of certain types of cancers in the body and that one mechanism is through the inhibition of Cytochrome P450 1A1 and 1B1.

Iimoto and his students are testing various untested stilbene compounds synthesized by Dr. Ralph Isovitsch’s students for their ability to inhibit Cytochrome P450 1A1 and 1B1.  Thus far they have found at least one stilbene that inhibits the enzymes more so than resveratrol, and they have also discovered a new class of compounds that are even more potent inhibitors of the enzyme.  Iimoto and his students are in the process of completing their tests so that they can publish their results in an appropriate journal.