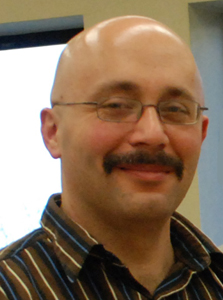 Professor Ralph Isovitsch is a native of western Pennsylvania. He earned his Bachelor of Science degree in Chemistry from Grove City College in May of 1992. He then went on to earn his Ph.D. in organic and inorganic chemistry from the Louisiana State University in Baton Rouge in May of 1997. His Ph.D. advisor was Dr. Andrew Maverick. After eight long months of postdoctoral work with Dr. Russell Schmehl at Tulane University in New Orleans, he started his first tenure-track job as a member of the Division of Science and Mathematics at the University of the Virgin Islands on St. Thomas, USVI. He left the USVI for his second job in the chemistry department of Xavier University of Louisiana in New Orleans in August 2002. In August 2005, Hurricane Katrina chased him from Xavier University to his current (and hopefully final) job in the chemistry department of Whittier College. He was tenured and promoted to Associate Professor in the fall of 2010.

At Whittier College, Isovitsch teaches organic chemistry lecture and lab (which keeps his quite busy), advanced organic chemistry lecture every once in a while, and the senior level courses Seminar and Integrated Lab on a semi-regular basis. He also contributes to the Liberal Education curriculum by teaching a course on natural disasters and also Freshman Writing Seminar.

Research is where you apply all of those things that you learn in lecture to the solving of real problems. While participating in research gives you a deeper understanding of chemistry, it also enhances your patience and perseverance, as well as giving you practice in following directions, working independently, making observations, writing and working constructively with others.

Participation in research takes time and dedication. It not only is a great opportunity to learn and grow, but also one where you can be observed one-on-one, which can result in a great letter of recommendation. Other outcomes from your time doing research can include presentation of research results on posters at national meetings of the American Chemical Society and publication of research papers in peer-reviewed journals, both of which can make you stand out in a pool of applicants for graduate school or for a job.

The research that is done by Professor Isovitsch and his students is interdisciplinary. It broadly encompasses the fields of organic and inorganic synthesis, analytical chemistry as well as physical chemistry. Specifically, they make new molecules and study their properties toward the goals of applying them to diverse areas such as the catalysis of carbon bond formation and molecular electronics.

The following narrative describes just a few of the many different research projects that are currently being worked on by Whittier students in Isovitsch's lab.

Stilbenes are a diverse family of molecules that all have a central carbon-carbon double bond with two phenyl rings attached. Most stilbenes are to some extent are luminescent. This project seeks to add to the understanding of how the placement of substituents affects the luminescence of stilbene derivatives. To date, this project focused on the two structural isomers of diacetylstilbene shown in the above picture. Results from this project have been presented on posters given by Whittier students at national meetings of the American Chemical Society and have been featured in two peer-reviewed publications that have appeared in the Journal of Molecular Structure and Helvetica Chimica Acta. Future work will involve the synthesis and study of brominated stilbene derivatives.

The biological and antioxidant properties of the above stilbenes and others have been studied in a collaboration with Professor Erica Fradinger and her students in the Biology department.

Schiff bases are an enormous class of versatile molecules that share one common characteristic: they all contain a carbon-nitrogen double bond with alkyl or aryl groups attached to the nitrogen atom. Isovitsch and his students' work in this area involves the synthesis of Schiff bases with interesting aromatic moieties and then examining their ability act as ligands toward transitions metals, such as rhenium and palladium. They then go on to examine the photophysical properties of the new Schiff base and those of the metal complexes prepared from them. The picture above shows just some of the Schiff bases that Isovitsch and his students have prepared, all of which have been presented on posters given at national meetings of the American Chemical Society. The synthesis and photophysical properties of the Schiff base on the left and its rhenium(I) complex was featured in a peer-reviewed publication in the journal Inorganica Chimica Acta, while the preparation, solid state structure, and photophysical characteristics of the one on the right was described in a peer-reviewed article that appeared in the Journal of Chemical Crystallography. The syntheses, solid state structure and electronic absorption spectra of the Schiff base in the center of the picture, along with its cousin that has methoxy groups instead of bromo groups, as well as their palladium(II) complexes have been described in a paper that is currently being considered for publication in the Journal of Coordination Chemistry.

Future work in this area will focus on assessing the catalytic properties of the palladium(II) complexes of the Schiff base in the center and ones similar to it toward the formation of carbon-carbon bonds.

Linear triazenes are a diverse family of organic molecules that all contain three nitrogen atoms bonded together in a linear arrangement. Isovitsch and his students' initial focus on triazenes was on their utility as stilbenes precursors. For example, two of Isovitsch and his students' triazenes have been featured in their stilbene papers in supporting roles, but as they learn more about them, Isovitsch and his students are publishing papers where they are the exclusive focus. The triazene on the right in above picture was one of the first made in our lab and its synthesis and solid state structure have been featured in a publication in the journal Acta Crystallographica E, while the synthesis, solid state structure and photophysical characterization of the one on the right was featured in an article in the Journal of Heterocyclic Chemistry. A manuscript detailing the synthesis, solid state structure and photoisomerization of two triazenes similar to the ones above is currently being written and will be submitted to the Journal of Physical Organic Chemistry.

Future work on this project involves a complete photophysical characterization of all of the linear triazenes that we have made. A detailed study of their photoisomerization kinetics will also be completed.

A collaboration with Professor Iimoto and his students is investigating the ability of linear triazenes to inhibit C-P450 enzymes, which are implicated in certain cancers.