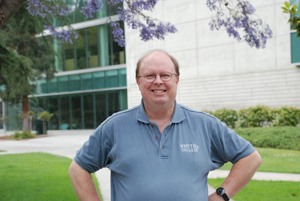 He taught in all the areas of American literature, but with a special interest in the work of the 19th Century. He also taught courses in literary theory, American intellectual history, British Romantic poetry, autobiographical writing, and a number of other things along the way. He was awarded the Harry Nerhood Teaching Excellence Award in 1994, and a special prize for teaching excellence from The Graves Foundation the following year. He has paired courses with faculty colleagues in religious studies, history, and sociology, and has taught College Writing Seminars and courses for the Whittier Scholars Program.

His recent scholarly interests have been primarily concerned with American “non-fictional writing,” especially autobiography and writing about baseball. He is interested in baseball as a cultural, social, spiritual phenomenon, manifested not only in the play of the game, but in the voluminous literature the game has produced. Most of his publications and conference presentations have been in this area.

Adams has held a number of significant administrative posts at the College. He directed the College Writing Center (for which he was given the Marilyn Veich Award by the associated student body), and has served as chair of the English department, chair of the faculty, associate academic dean, and director of the Whittier Scholars Program, and, finally, interim vice president for academic affairs and dean of the faculty.