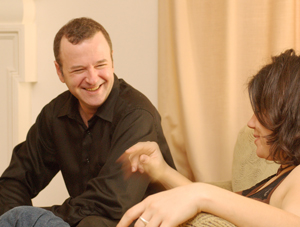 Tony Barnstone is a Professor of English at Whittier College and the author of 21 books and a music CD. He is a prolific poet, author, essayist, and literary translator. In addition to his numerous published books, his work has appeared in dozens of American literary journals, from APR to Poetry.

Barnstone's first book of poetry, Impure, a finalist for the Walt Whitman Prize of the Academy of American Poets, the National Poetry Series Prize, and other national literary competitions, appeared with the University Press of Florida in June of 1999. In 2002, he authored a chapbook of poems, Naked Magic (Main Street Rag) and Sad Jazz: Sonnets, appeared in 2005 with Sheep Meadow Press. His subsequent book of poems, The Golem of Los Angeles, won the Benjamin Saltman Award in Poetry and was published in late 2007 by Red Hen Press. Tongue of War: From Pearl Harbor to Nagasaki, published in 2009, is a book of dramatic monologues set in the Pacific during the Second World War. Tongue of War won a fellowship from the NEA, the John Ciardi Prize in Poetry, the Poets Prize, and the Silver Award of the Independent Publishers Book Awards. His selected poetry, Buda en Llamas: Antología Poética (1999-2012) appeared in a bilingual Spanish-English edition with Ediciones El Tucán de Virginia (Mexico City) in 2014, with translations by Mariano Zaro.  In 2014, Barnstone’s 5th book of poems, Beast in the Apartment, appeared with Sheep Meadow Press.  His latest poetry book is Pulp Sonnets (Tupelo Press 2015), based on 20 years of research into classic pulp fiction, Gothic literature, B movies and comic books.  The book has been illustrated by distinguished Iranian artist Amin Mansouri, making it something like a graphic novel in verse.

Recently he has been doing multimedia work.  He is working with artist Alexandra Eldridge to make a poetry deck of cards, and with singer-songwriters John Clinebell and Ariana Hall to put out a CD of original music based on his book of WWII poems, Tongue of War (album titled Tokyo Burning: World War II Songs, available on CD Baby, Spotify and Amazon.com).