Using a Camera to Inspire Respect 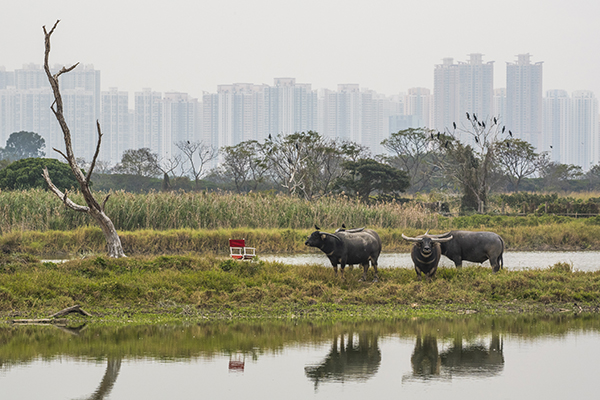 The animals had been rescued after roads and cities overtook their natural habitats; the wetland of Hong Kong's Mai Po Nature Reserve is now their lush sanctuary. As one of the buffalo turned its horned head to look straight at him, VanDerStarren could see another sight through his lens: the looming skyline of Shenzhen, an ever-present reminder of the urbanization surrounding the reserve on almost all sides. He snapped the photo.

“We love the symbolism of the Mai Po water buffalo,” said VanDerStarren, an enormous version of the photograph behind him, as he presented the ambitious photography project, Take Your Seat, at the Luce Initiative on Asian Studies and the Environment (LIASE) conference in Villalobos Hall earlier this year. The photo features another conspicuous element: a red movie director’s chair, just to the left of the buffalo. The chair is a fixture of the project; when VanDerStarren and his father travel, they capture photos of the chair in beautiful and poignant locales. The chair symbolizes the viewer, and its placement is meant to encourage viewers to treat the world and themselves with respect, and live the life they intended.

It was at the LIASE conference the previous year that VanDerStarren met the reserve’s wetland preservation director, Dr. Michael Lau, who came to present research. That connection led directly to Lau offering his service as Take Your Seat’s personal guide through Mai Po.

VanDerStarren, who’s working on a self-designed major in Sustainable International Business through the Whittier Scholars Program, doesn’t just want to capture beautiful scenery—though he has an immense and growing skill with his camera. He wants to highlight the intersection of man’s world with the natural one. At the conference, he changed slides from the water buffalo to a breathtaking view of an island cliff plunging into the waves off Hong Kong. The slides changed again, this time revealing a sea of discarded plastic that had washed up on the shore.

“It breaks my heart and in some ways, I hope it breaks yours, too,” VanDerStarren said to the audience. “I hope that these snapshots combined with the Take Your Seat photographs inspire you to recognize that you only get one life and we only have this one planet.”

His studies at Whittier have certainly helped him with Take Your Seat, especially from an environmental science perspective, and he isn’t done, yet. This summer, VanDerStarren plans to fly to the United Arab Emirates before continuing the project while he studies abroad in Japan this fall. Eventually, he also has plans to return to his home country, Canada, to retrace the steps of famous painters and photograph the chair in the locations that inspired them to paint their renowned landscapes.

Beyond the project, VanDerStarren also makes a difference for the environment at Whittier, too. As a member of the Food Recovery Network, he helps salvage hundreds of pounds of unused food from the Campus Inn. Next year, he will also become co-director of the Sustainability Club.

Whittier’s LIASE program is funded by the Henry Luce Foundation’s Asia Program. LIASE provides students and professors with unique opportunities to work together to deepen understanding of Asia and the environment, through a variety of curricular and extracurricular opportunities. Specifically, the project encompasses interdisciplinary perspectives on the environment and sustainable development in Asia, particularly China and its neighbors.

Using a Camera to Inspire Respect