The Religious Society of Friends established the town of Whittier in 1887 and the Whittier Academy the same year. 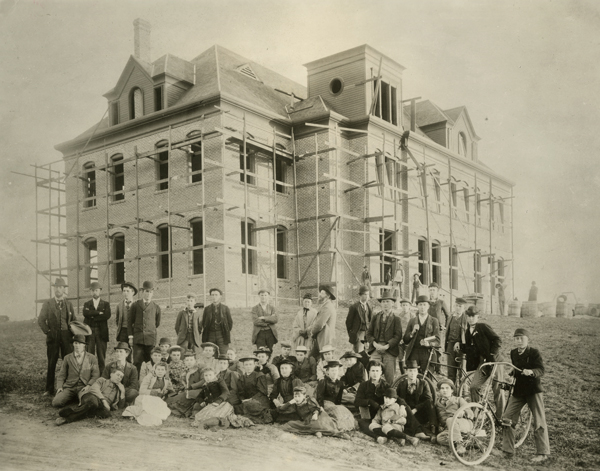 Whittier College grew from the academy and was chartered by the State of California in 1901 with a student body of 25.

Both the town and the College were named in honor of John Greenleaf Whittier, prominent Quaker, poet, and leader in the abolitionist movement. Although no longer affiliated with the Society of Friends, the College remains proud of its Quaker heritage and deeply committed to its enduring values, such as respect for the individual, fostering community and service, social justice, freedom of conscience, and respect for human differences. In its more than 100 year history, Whittier College has embraced and upheld these values as the foundation for its academic and social community.

The College began construction on its first building, Founders Hall, in 1893. Initially, Founders Hall housed all classes, dormitories, and the library. Several buildings were later added to the College, including a gymnasium and the Redwood Building, the latter housing female students and the College library. Campus icon, the Rock, was installed by four senior pranksters in 1912.

During the 1920s Whittier became an athletic powerhouse in California, playing teams from institutions its own size, as well as universities such as USC, UCLA, and Cal Berkeley. This decade also marks the first foreign national enrollee: a woman student from Russia.

During the 1930s, the College acquired the Mendenhall building, originally belonging to the Elks Lodge. That building housed the administrative offices and the library. It was during this decade the College began to detach itself from the Quaker Yearly Meeting, becoming fully independent by the end of the 1930s. It was also during this time that Whittier's most famous alumnus, Richard Milhous Nixon, spent his four undergraduate years making an indelible mark on the College's history—as a founding member of the Orthogonian Society, as a well-liked student body president, a strong performer in the debate club, and as a football player on the Poet team, albeit one that spent much of his sports career good-naturedly on the bench.

In the 1940s, World War II and the call to enlist caused the college-bound and college-enrolled male population to sharply decline; so much so that Whittier College agreed to absorb the entire student body of neighboring Chapman University. Service projects and service clubs, focusing on aiding and comforting soldiers oversees and training in domestic camps, sprung up on the Whittier campus; these efforts included a toy, clothing, and candy drive for children in Japanese-American internment camps. As the war ended and veterans returned home, Whittier College's enrollment lists once again swelled. This began a prosperous time for the College and a construction boom soon followed.

Most of the major buildings on campus were built in the mid to late 20th century - three in the 1940s and 1950s, seven in the 1960s, three in the 1970s and 1980s, and five since 1990. Additionally, several structures on campus have been extensively modified or expanded to accommodate modern needs and a growing student body. A complete renovation of the Campus Center was completed in 2008, while the Graham Athletic Center and Lillian Slade Aquatics Center completed a major renovation and expansion project in 2012. More recently, the College transformed the old Science Building into the new Science & Learning Center.

Today, Whittier College is a cosmopolitan vanguard of 21st century society, recognized worldwide as a distinctive and relevant liberal arts college, offering additional graduate degrees in both education and law. More than 50 percent of Whittier College undergraduates, and three of its four Rhodes Scholars, are from underrepresented ethnic and international groups; this kind of cultural diversity, which permeates both classroom and campus community, profoundly strengthens intellectual discourse and provides a realistic exposure to the kind of world students will enter upon graduation. Students and faculty continue a long tradition of community service, echoing the Quaker conviction that helping others is a moral obligation. International study opportunities enrich every field and major, reflecting the Quaker idea that truth transcends the boundaries of race, culture, and nation.