Religious studies students and professors work as a team to explore the topics that inspire them while pushing the boundaries of knowledge and inquiry.

It's common, in fact, for religious studies students to assist professors with their research, publications, and projects. And, with the support and supervision of their professors, Religious Studies students also pursue an array of fieldwork and research projects that fulfill their curiosity and feed their passion. Reflecting on these experiences, Whittier students regularly participate in conferences (such as the Southern California Conference on Undergraduate Research) and other academic gatherings across the nation. 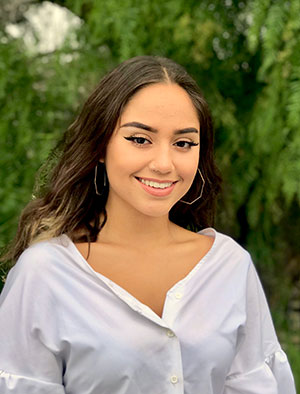 Ivelis Colòn is discovering how religion affects incarcerated women who are part of the LGBTQ community.

To conduct her research, she teamed up with Los Angeles Centers for Alcohol and Drug Abuse (LA CADA) to survey and interview women at one of the center’s residential facilities. Seven women volunteered, most of whom were of Protestant or Catholic faith. Ivelis said she entered the study feeling “a little intimidated.” But after sitting down with them in a focus group, their confidence and their hope left her in awe.

“They wanted to share their stories,” Ivelis said. “That is the point of my study: to give a voice to those who are often voiceless.”

People have varying, personal ways of negotiating their faith and their LGBTQ identity, Ivelis said. Most commonly, she found women who enjoy spirituality and accept God, despite the chance of ostracization.

Ivelis’ project emerges from a genuine effort to understand the relations between religion, incarceration, LGBTQ identity, and the transition out of prison, said Associate Professor Jason Carbine, the C. Milo Connick Chair of Religious Studies.

“Justice and incarceration, religion and sexuality, are complexly related matters; when they converge in the lives of LGBTQ women (and others), they can be profoundly transformative in both positive and negative ways,” Carbine said. “Ivie’s project tries to see how and why this is the case.”

Ivelis, who has a heart for social work, discovered a passion for research at Whittier College that has shaped the course of her life. The enthusiasm in her voice is impossible to miss as she describes the questions that arose in her mind as she formulated her study, and the further avenues she could take her research.

“It’s that one thing that I have a burning passion for. So I had to do it. Now that I did it, I already know what my next one’s going to be. I really want to study pregnant women in prison, and then injustices when it comes to them,” she said.

After graduating this May, Ivelis intends to pursue a master’s in social work, gain more real-world experience in the workforce, and ultimately earn her Ph.D. in social work to continue her research.

Ivelis' study with LA CADA was supported by the Alianza de los Amigos Martin Ortiz Fellowship, which gave her the financial support to stay in L.A. for the summer to conduct her research, instead of returning home to Chicago. Her impressive knowledge, enthusiasm, and synthesis of her dual majors helped win her the fellowship award, said Office of Equity and Inclusion Director Jenny Guerra.

Student research is a tradition at Whittier

Learn from leaders in their fields

Jason A. Carbine’s research traverses the Buddhist and religious cultures of Southeast and South Asia, and he teaches widely on religion and society across Asia and around the globe. He is the author of Sons of the Buddha: Continuities and Ruptures in a Burmese Monastic Tradition (2011), and co-editor and contributor to How Theravada is Theravada? Exploring Buddhist Identities (2012). He has several works in progress, focusing on Myanmar, ritual space, and the environment, among other topics.

Rosemary P. Carbine specializes in historical and contemporary constructive Christian theologies, focusing on comparative feminist, womanist, and Latinx/mujerista theologies, theological anthropology (religious understandings of personhood, including but not only race, gender, and sexuality), U.S. Christian social thought and movements, U.S. public/political theologies, and teaching and learning in theology and religion. She has co-edited and contributed chapters to three books, namely The Gift of Theology (2015), Theological Perspectives for Life, Liberty, and the Pursuit of Happiness (2013), and Women, Wisdom, and Witness (2012). She has published numerous essays in scholarly journals and anthologies, most recently appearing in T & T Clark Companion to Theological Anthropology (forthcoming, 2019), Theologies of Failure (forthcoming, 2018), Planetary Solidarity (2017), and Awake to the Moment (2016).

Irfana M. Hashmi specializes in the history of the Islamic world, focusing on the urban mosque. Her current book project focuses on the social world of learning at al-Azhar in the 16th and 17th centuries. She is working on a digital humanities project, titled Digital al-Azhar, an interactive 3D Virtual Reality model of al-Azhar Mosque. Hashmi’s scholarly work has been supported by a number of fellowships and grants; she is currently on leave working on her book manuscript, The Social World of Islamic Learning at al-Azhar Mosque. Hashmi's leave is supported by a faculty grant award from the National Endowment for the Humanities.