Theatre and communication arts majors have opportunities to wow audiences and engage with their studies hands-on in various professor-directed productions. 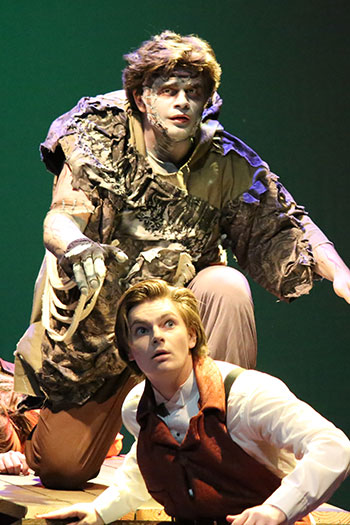 Garrett Spejcher portrayed the complex character of Dr. Victor Frankenstein in a Whittier College production based off of Dorothy Louise’s adaptation from Mary Shelley’s classic novel.

Besides telling the story of a scientist creating a monster, Frankenstein explores how a good and hopeful man can be the reason for his own downfall.

“It’s a challenge because I have to show how a good man can be turned into a monster by his own demons—both metaphorical and literal,” Garrett said, discussing the challenge in portraying Dr. Frankenstein. “But as an actor, all you can ask for is to be given that chance to really push yourself as a performer.”

Garrett’s years of experience in acting prepared him well for the part. He started acting when he joined the drama club in sixth grade and continued throughout high school. At Whittier, he found the opportunity to continue his pursuit of acting and became involved in multiple productions.

“Performing was the first thing I ever really loved doing. I felt like I found my calling,” he said. “I realized this is what I want to do.”

It’s no small task to fit the entirety of William Shakespeare’s plays into a 93-minute play. The same goes for supplying props for the madcap performances, ranging wildly from Romeo and Juliet's tragedy to the magical mirth of Midsummer Night’s Dream. But Jocelyn Lopez, fresh off her leading role in Whittier College’s previous play, was more than up to the challenge—and pulled it off so well, she’s won an award and is headed to a prestigious festival.

Every year, Whittier students show off their theatre skills at the Kennedy Center American College Theatre Festival. The festival brings together students and professors to encourage, recognize, and celebrate the finest and most diverse work produced in university and college theater programs.

Whittier students bring a series of scenes and monologues to compete with other undergraduate and graduate student actors in Region VIII, which includes schools from Southern California, Hawaii, Guam, Utah, Nevada, and Arizona. The festival also features a wide range of workshops in all areas of theater, including performance, stage management, playwriting, directing, and more.

This year, Gunner Joachim brought his award-winning skills combining theatre and history to the national stage. A double major in history and theatre, Gunner was selected to attend the prestigious festival thanks to his work on the fall production of Gaslight. While he shined as a detective in the Victorian thriller, it’s his role behind the scenes as the dramaturg—in essence, the show’s researcher—that’s won him a spot at the festival.

Last year, six students are nominated for the festival, including Jocelyn. Besides individual work, the students are bringing a scene from The Good of Sichaun (directed by Professor Jennifer Holmes) to show their fellow thespians. Students who succeed in the competition have the opportunity to perform at the national competition.

For more information, contact the Department of Theatre and Communication Arts at 562.907.4202.