At Whittier College, our student body works in close, active collaboration with professors who are leaders in their fields. Together, this team of learners conducts research projects that push the boundaries of knowledge and inquiry.

For example, select students support faculty members with their professional academic investigations. At other times, it is the faculty which assists the efforts of students in pursuing groundbreaking new research. As a result of these experiences, and with confidence in their own abilities, Whittier students regularly go on to participate in conferences (such as the Southern California Conference on Undergraduate Research and the Phi Alpha Theta southern California regional conference) and other academic conclaves across the nation.

Students further interact with faculty members in programs that are part of the College’s Centers of Distinction and take place at Garrett and Hartley Faculty-in-Residence Houses, on-campus residences where professors live for a multi-year term and coordinate and host an array of educational and social activities.

While students at large universities struggle merely to gain face-time with professors, here at Whittier, students interact with the faculty personally and on a daily basis. 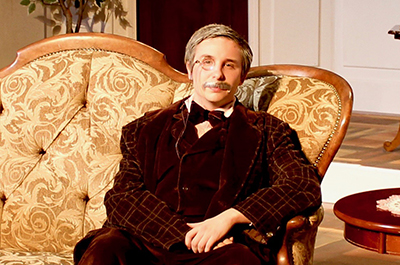 Authenticity and truth matter, including on the stage, and Gunner Joachim used his skill in historical research to bring an important level of realism to the College's production of the Victorian drama, Gaslight.

As the play's dramaturg—in essence, the show’s researcher—Gunner explored what the cast and crew would need to know about 1800s England, such as how gender and class intersected and interacted with the power structure of both the Victorian household and the society at large. Through his readings, Gunner learned about the era’s patriarchal structure—a dynamic that the villain of Gaslight takes advantage of in order to keep the protagonist—Bella, his wife—from questioning his criminal behavior.

He synthesized his research with his knowledge of theatre into a series of weekly video essays that he could share with the cast and crew about how to create the most authentic play they could. The videos covered all kinds of topics from social norms and class systems to physical details like architectural styles and the era’s common household items.

“Gaslight happens to be a particularly complicated show,” said director Katie Liddicoat. “While it is set in Victorian times, it was written at the end of the Industrial Revolution, and Gunner’s research on both of those eras provided invaluable insights into the various messages of the play.”

When Gaslight opened, audiences were wowed by not only by the celebrated acting, but by the production’s impressive immersion into Victorian England, from the detailed sets to period-accurate costumes and dialects. The first two nights of the weekend run sold out every seat in the Ruth B. Shannon Center for the Performing Arts’ Studio Theatre.

The success of Gaslight launched Gunner, who also had a role in the play as a detective, and his co-stars to the regional Kennedy Center American College Theatre festival. Proving the strength of his abilities, Gunner qualified for the Kennedy Center nationals after winning the top dramaturgy award.

“I was pretty floored, to be honest,” Gunner said. “It was very surreal.”

“Dramaturgy, for him, provides a means to merge his passions for theatre and the study of history, from an extremely interdisciplinary perspective,” said Professor of Theatre Gil Gonzalez. His impressive work on the play was the perfect opportunity for him to meld his dual passions.